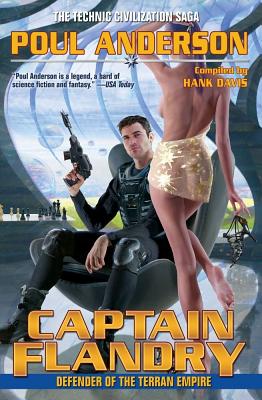 Two novels and four novellas collected for the first time in volume five of multiple Hugo- and Nebula-award-winning Poul Anderson’s Technic Civilization science fiction adventure epic. In the twilight of the Terran Empire, one secret agent stands ready with the grit and wits to save a corrupt empire by hook or by crook.

In the twilight of the Terran Empire, one man exists who can save his empire—and civilization itself—by hook or by crook, whether his “betters” appreciate his efforts or not. Flandry is both agent of empire, and agent-provocateur of change. For even as he fights for the old guard, Flandry remains well aware that change is afoot and that he has the ability to influence the direction of galactic civilization for eons to come.

Flandry is a heroic but tragic figure: a man who knows too much history, who knows that battle and scheme as he will the Long Night of Empire is approaching. If that darkness is not to fall in his own lifetime, must do what he can. And anyone, human or alien, who gets in his way, will most definitely regret it.

The fifth entry in the seven-volume complete cycle of The Technic Civilization Saga includes the novels The Day of Their Return and A Message in Secret, plus four novellas.

Poul Anderson was one of the most prolific and popular writers in science fiction. He won the Hugo Award seven times and the Nebula Award three times, as well as the Grand Master Award of the Science Fiction Writers of America.  With a degree in physics, and a wide knowledge of other fields of science, he was noted for building stories on a solid foundation of real science, as well as for being one of the most skilled creators of fast-paced adventure stories. He was author of over a hundred novels and story collections, and several hundred short stories, as well as several mysteries and nonfiction books.
Loading...
or
Not Currently Available for Direct Purchase