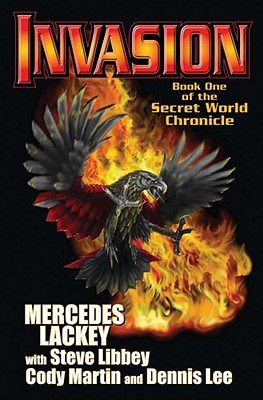 Book One of the Secret World Chronicle

From New York Times best-seller and science fiction and fantasy mistress of adventure Mercedes Lackey, the start of a new saga of modern-day humans with superpowers—and the men and women who must learn to wield those powers without losing themselves in the process.  Plus, of course, an interdimensional Nazi menace!  Inspired by characters created for the massive multiplayer on-line game City of Heroes, and supported by a popular web site podcast!

It’s good to be meta-human, a superhuman hero in a world of normals. Use your superpowers, fight crime, stave off the occasional rogue mutant—then get some rest and have a nice day. But when swastika-laden robotic warriors from an alternate and incredibly advanced Third Reich discover a way to breach the barrier between worlds, the metas face an opponent that will push them to the edge of extinction.And if they can survive the transdimensional menace, the titanic effort will finally push the metas onward to find their true place in society and force them to forge a new, heroic destiny for their kind!

From New York Times best-seller and science fiction and fantasy mistress of adventure Mercedes Lackey together with a team of topnotch collaborators, the start of a new saga of superpowers—and the very human men and women who must learn to wield them without losing themselves in the process!

Mercedes Lackey is the New York Times best-selling author of the Bardic Voices series and the Serrated Edge series (both Baen), the Heralds of Valdemar series, and many more. Among her popular Baen titles are The Fire Rose, The Lark and the Wren, and The Shadow of the Lion (with Eric Flint and Dave Freer). She lives in Oklahoma.

Steve Libby was born in Cincinnati, Ohio.  He has worked as a graphic designer, a teacher of computer graphics, a web designer, and occasionally plays guitar with a seven-piece funk band.

Cody Martin is originally from Scottsdale, Arizona, and currently resides in Florida where he's a self-described anarchist and avid gamer.

Dennis Lee was born in Seoul, Korea and grew up in Canada. He has a degree in pharmacology and is a cell biologist when not writing.
or
Buy Here
(This book is on backorder)
Copyright © 2020 American Booksellers Association