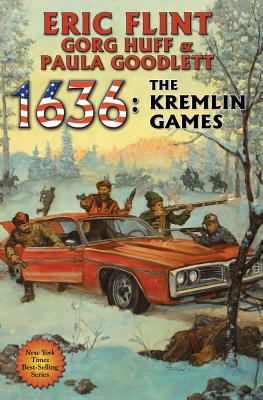 A new addition to the multiple New York Times best-selling Ring of Fire series. After carving a place for itself in war-torn 17th century Europe, the modern town of Grantville, West Virginia continues its quest for survival. A Grantville resident helps Russia modernize, but he in turn must deal with 1600s Russian culture and politics—or wind up dead.

1636. Grantville has bounced back and established its new mission and identity, but it seems some have been left behind—people like Bernie Zeppi, courageous in the battle, but unable to figure out what to do with himself in a world that’s utterly changed. Then Russian emissary Vladimir Gorchacov arrives in Grantville and hires Bernie to journey to Moscow and bring the future to a Russia mired in slavish serfdom and byzantine imperial plots. Bernie jumps at the chance. He figures it to be an easy gig, complete with high pay and hot-and-cold running women.
But one thing Bernie hasn’t counted on is the chance to find his purpose in Mother Russia, from fighting the needless death of children from typhoid to building the first dirigible in Russian history. And then there’s love. Just as Bernie realizes his feeling for a certain Russian noblewoman may have gone way beyond respect, he finds them both enmeshed in the deadly politics of Kremlin power struggles.

Paula Goodlett retired from the military as a non-commissioned officer in the early nineties. She broke her leg in 2003, which led to her browsing Baen's Bar lest she become bored during her enforced inactivity. Captivated by the 1632 universe concept, she began as a special assistant to Eric Flint. She eventually wrote a large important sequence of the storyline in 1634: The Ram Rebellion. She is editor of the Grantville Gazettes and chairs the 1632 Editorial Board. Additionally, Paula is assistant editor of the e-zine Jim Baen's Universe. Paula mainly writes in tandem with Gorg Huff.
Loading...
or
Not Currently Available for Direct Purchase