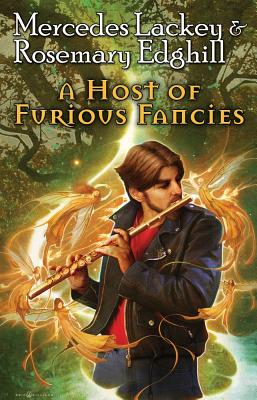 A Host of Furious Fancies

Two urban fantasy bestsellers in the Bedlam’s Bard series together in one volume.

Beyond World's End: Sieur Eric Banyon, Knight and Bard to the court of the Queen of Elfhame Misthold, moves back to the Big Apple to take care of unfinished business. Mostly, he just wants to settle down to a normal life.
However, he quickly discovers his Manhattan apartment has unique features, including a living gargoyle named Greystone and four Guardians who have sworn to protect New York from evil. And soon Eric discovers that unscrupulous researchers have created a drug that unlocks magical powers in humans—a drug that is 100 percent fatal over time. And now something evil from Underhill has other plans and seeks to use the temporary human powers to dominate World Above.
Spirits White as Lightning: Eric Banyon has more to worry about than passing his courses at Julliard. The evil elf lord Aerune, whose love was killed by mortal men, is determined to destroy the human race. Eric's only hope of stopping Aerune is to trap him inside a magical maze, from which there is no escaping. Stopping Aerune once before was difficult. This time, the quest seems nothing less than impossible.