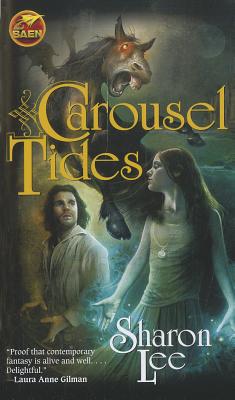 " A] virtuoso ride, full of the spirit of the carnival, aware of the thinness of the veil between the worlds. . .a rollicking tale full of non-stop action. . .and yet there's also a quiet at its heart, because there really is this magic in everything and Sharon Lee knows how to spin it."-SFsite On Sharon Lee & Steve Miller's Liaden Universe(R) Space Opera Epic:
"Lee and Miller's novels are full of action, exotic characters, plenty of plot, and even a touch of romance. The world building is outstanding." -Booklist

Sharon Lee has been married to her first husband for more than half her lifetime; she is a friend to cats, a member of the National Carousel Association, and oversees the dubious financial schemes of an improbable number of stuffed animals. Despite having been born in a year of the dragon, Sharon is an introvert. She lives in Maine because she likes it there. In, fact, she likes it so much that she's written three novels set in Maine: mysteries Barnburner, and Gunshy, and contemporary fantasy Carousel Tides. With the aforementioned first husband, Steve Miller, Sharon has written eighteen novels of science fiction and fantasy-many of them set in the Liaden Universe(R) -and numerous short stories. She has occasionally been an advertising copywriter, a reporter, photographer, book reviewer, and secretary. For three years, she was executive director of the Science Fiction and Fantasy Writers of America, and was subsequently elected vice president, and then president of that organization.
or
Not Currently Available for Direct Purchase
Copyright © 2020 American Booksellers Association