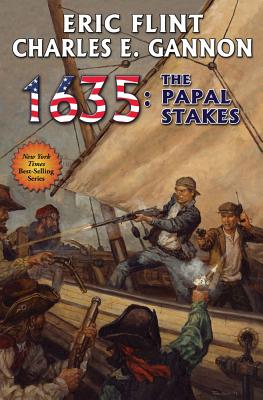 A new addition to the multiple New York Times best-selling Ring of Fire series. After carving a place for itself in war-torn 17th century Europe, citizens of the modern town of Grantville, West Virginia take on the Borgias and Papal succession shenanigans that could undermine a Spring of freedom that has come to Europe three centuries early.

#15 in the multiple bestselling Ring of Fire Series.

It’s springtime in the Eternal City, 1635. But it’s no Roman holiday for uptimer Frank Stone and his pregnant downtime wife, Giovanna. They’re in the clutches of would-be Pope Cardinal Borgia, with the real Pope–Urban VII –on the run with the renegade embassy of uptime Ambassador Sharon Nichols and her swashbuckling downtime husband, Ruy Sanchez de Casador y Ortiz. Up to their necks in papal assassins, power politics, murder, and mayhem, the uptimers and their spouses need help and they need it quickly.

Special rescue teams–including Harry Lefferts and his infamous Wrecking Crew–converge on Rome to extract Frank and Gia. And an uptime airplane is on its way to spirit the Pope to safety before Borja’s assassins can find him. It seems that everything is going to work out just fine in sunny Italy.

Until, that is, everything goes wrong. Now, whether they are prisoners in Rome or renegades protecting a pope on the run, it’s up to the rough and ready can-do attitude of Grantville natives to once again escape the clutches of aristocratic skullduggery and ring in freedom for a war-torn land.

Charles E. Gannon is the author of Compton Crook Award-winning, Nebula-nominated Fire with Fire, Trial by Fire, and Raising Caine in the Caine Riordan series. He is the coauthor with Eric Flint of 1636: The Papal Stakes and 1636: Commander Cantrell in the West Indies in Eric Flint's best-selling Ring of Fire series. With best seller Steve White, Gannon is the coauthor of Starfire series entries Extremis, Imperative, and Oblivion. Gannon is also the author of multiple short stories. He is a member of SIGMA, the “SF think tank,” which has advised various intelligence and defense agencies since the start of the millennium. A former professor, Gannon lives near Annapolis, Maryland, with his wife and children.
Loading...
or
Not Currently Available for Direct Purchase