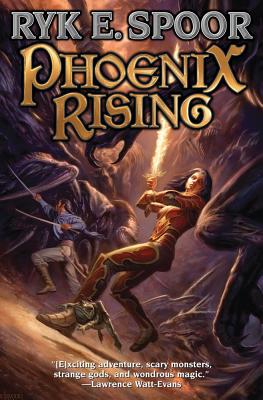 Original Trade Paperback. Breakout fantasy epic with strong magic world-building, engaging characters and wondrous adventure. A young woman forges herself into a warrior to avenge her murdered family members and confront a corrupt, evil knighthood that has taken over her native land. A breakout new fantasy epic filled with strong world-building, engaging characters, and wondrous adventure. Kyri: a highborn young woman whose life is shattered by the murder of her kin. But even as Kyri flees her beloved land Evanwyl, she knows that she is her family's only hope for justice, and Evanwyl's only chance to escape a growing shadow of corruption and destruction. Now Kyri must venture across Zarathan, a world on the brink of a long foretold Chaos War. It is a struggle that will rend the foundations of existence and may usher in a long age of darkness -that is, if Kyri and her companions do not succeed in holding back the tide of evil that is rising. Those companions include valiant swordsman Tobimar Silverun, Prince of Skysand, exiled on the turn of a card and a prophecy, who is now seeking his people's lost homeland; and Poplock Duckweed, an unlikely hero whose diminutive size is as much weapon as it is a weakness. Kyri's quest is as simple as it is profound: find a legendary, ancient weapon smith, take up the sword and armor of a new order of warrior-defenders, and bring the power of justice and vengeance to the evil and corruption that has darkened her native land. About Phoenix Rising
"A winner Phoenix Rising gripped me and drew me in. Kyri, Tobimar, and Poplock became friends, people I care for and want to know more about and spend more time with. Great characters, and thrilling adventure. I want more "--Ed Greenwood, best-selling author of the Forgotten Realms series " E]xciting adventure, scary monsters, strange gods, and wondrous magic."--Lawrence Watt-Evans "I became very involved with Kyri's quest for vengeance and justice." -P.C. Hodgell, author of the best-selling Kencyrath Series.

Ryk E. Spoor is the author of Digital Knight, Grand Central Arena and, with New York Times best selling coauthor Eric Flint, two book in the Boundary series, Boundary and Threshold. While earning his masters degree in Pittsburgh, Spoor became a playtesting consultant and writer for the Wizards of the Coast, the leading publisher of role-playing games and related novels. He now lives in East Greenbush, NY, working as a technical proposal writer for a high-tech R&D firm, and spending his nonwriting time with his wife and sons.
or
Not Currently Available for Direct Purchase
Copyright © 2020 American Booksellers Association