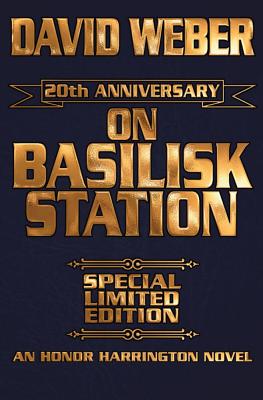 Special Signed Limited Leather-bound Edition First Entry in the Honor Harrington Series. Baen Books celebrates a twenty years of Honor with the reissue of the book that started it all: internationally best-selling phenomenon David Weber's On Basilisk Station. Special Leather-bound Edition. Baen Books celebrates twenty years of the Honor Harrington saga with the reissue of the first book in the series: multiple New York Times best-seller David Weber's On Basilisk Station. The Book That Started It All Honor Harrington has been exiled to Basilisk station and given an antique ship to police the system. The vindictive superior who sent her there wants her to fail. But he made one mistake; he's made her mad... About On Basilisk Station
"Without question SF's most popular military-themed series, the Honor Harrington novels are also among the genre's most intelligent, exciting and rewarding. On Basilisk Station, the series' premiere volume, is a spectacular piece of action storytelling that does virtually everything right."--SF Reviews About David Weber and the Honor Harrington series:
." . .everything you could want in a heroine....excellent...plenty of action."-Science Fiction Age "Brilliant Brilliant Brilliant "-Anne McCaffrey "Compelling combat combined with engaging characters for a great space opera adventure."-Locus "Weber combines realistic, engaging characters with intelligent technological projection. . .Fans of this venerable space opera will rejoice. . ."-Publishers Weekly Comprehensive Teacher's Guide available.

With over seven million copies of his books in print and seventeen titles on the New York Times bestseller list, David Weber is the science fiction publishing phenomenon of the new millennium. In the hugely-popular Honor Harrington series, the spirit of C.S. Forester's Horatio Hornblower and Patrick O'Brian's Master and Commander lives on--into the galactic future. Books in the Honor Harrington and Honoverse series have appeared on fourteen best seller lists, including those of The Wall Street Journal, The New York Times, and USA Today. While Weber is best known for his spirited, modern-minded space operas, he is also the creator of the Oath of Swords fantasy series and the Dahak saga, a science fiction and fantasy hybrid. Weber is has also engaged in a steady stream of bestselling collaborations including his Starfire Series with Steve White, which produced the New York Times bestseller The Shiva Option among others. Weber's collaboration with alternate history master Eric Flint led to the bestselling 1634: The Baltic War, and his planetary adventure novels with military science fiction ace and multiple national best-seller John Ringo includes the blockbusters March to the Stars and We Few. Finally, Weber's teaming with Linda Evans produced the bestselling Multiverse series. David Weber makes his home in South Carolina with his wife and children.
Loading...
or
Not Currently Available for Direct Purchase