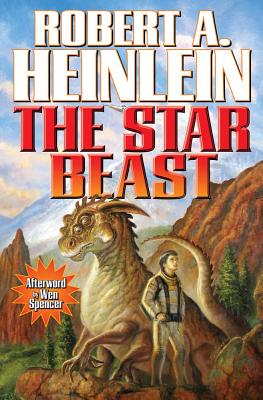 Compelling coming-of-age SF adventure from legendary SF master and multiple New York Times best-seller Robert A. Heinlein. A young boy and his friend run away from home to protect a cute (if rather large) alien pet that turns out to be much more than just a pet indeed. Afterword by Wen Spencer. Lummox has been the pet of the Stuart family for generations. With eight legs, a thick hide and huge (and growing) size, Lummox is nobody's idea of man's best friend. Nevertheless, John Stuart XI, descendant of the starman who originally brought Lummox back to Earth, loves him. But when Lummox eats a neighbor's car and begins to grow again, the Feds decide enough is enough. John isn't about to let the authorities take his pet away, and with his best friend friend Betty, determines to save Lummox even if it takes leaving the life he's known forever. An all time science fiction coming-of-age classic from seven-time Hugo winner and Dean of Science Fiction, Robert A. Heinlein. About Robert A. Heinlein: "Not only America's premier writer of speculative fiction, but the great writer of such fiction in the world."--Stephen King. "One of the grand masters of science fiction."--Wall Street Journal Comprehensive Teacher's Guide available.

Robert A Heinlein is considered one of the "Big Three" of classic science fiction (along with Isaac Asimov and Arthur C. Clarke). Heinlein is a seven-time Hugo Award recipient and was given the first Grand Master Nebula Award for lifetime achievement. Heinlein's juveniles alone have influenced generations of scientists, engineers and creators the world over (for instance, it was once estimated that everyone in the Apollo 11 mission control room had read and loved at least one Heinlein novel). His worldwide bestsellers include Have Space Suit--Will Travel, Stranger in a Strange Land, Starship Troopers, Time Enough for Love, and The Moon Is a Harsh Mistress.
Loading...
or
Not Currently Available for Direct Purchase