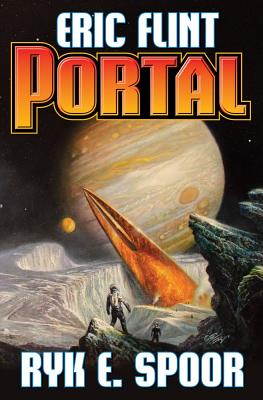 Madeline Fathom had miraculously landed the crippled Nebula Storm on Europa. She joined on that frozen moon of Jupiter the stranded crewmembers of the ill-fated EU vessel  Odin. The Nebula Storm's reactor was ruined in the landing, the Odin’s shuttle can’t make the trip back home, and the only vessel that could have make the journey to save them has just been destroyed by a renegade crewman, bad luck, and the remorseless forces of nature.

But Madeline, Helen Sutter, A.J. Baker and the team have one card left to play. All they have to do... is survive lethal radiation, vacuum, and ice as hard as steel while they figure out how to make  Nebula Storm fly again.

About Portal:
"Portal is a fast-paced tale that will remind many of classic science fiction from the 1950s and 1960s. If you were a fan of Hal Clement’s stories combining world-building and aliens, Poul Anderson’s space adventures or Robert Heinlein’s tales of competent people in extraordinary circumstances, you will like Portal ... Flint remains one of the leading modern authors of science-fiction, and Spoor establishes himself as a rising presence."—Daily News of Galveston County

Eric Flint is the author/creator of the New York Times best-selling Ring of Fire series, the most popular alternate history series today, including the recent Times best seller, 1636: The Kremlin Games. He collaborated with Ryk E. Spoor on two previous novels in this popular space adventure series, Boundary and Threshold.  received his masters degree in history from UCLA and was for many years a labor union activist. He lives in , with his wife and is working on more books in the best-selling Ring of Fire series.

Ryk E. Spoor, while earning his masters degree in Pittsburgh, became a playtesting consultant and writer for the Wizards of the Coast, the leading publisher of role-playing games and related novels. He now lives in East Greenbush, NY, working as a technical proposal writer for a high-tech R&D firm, and spending his non-writer time with his wife and sons. His solo novels for Baen include Digital Knight, Grand Central Arena, and Phoenix Rising.
or support indie stores by buying on
Copyright © 2020 American Booksellers Association