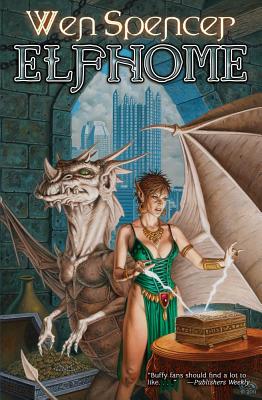 #3 in the groundbreaking, award-winning Elfhome series. Pittsburgh, PA has been magically transported to a world of elves and magic in order to stave off a monstrous invasion of Earth. Now Tinker must root out and destroy an evil plot.

Elfhome. A world of powerful magic, beautiful elves, man-eating trees, frost-breathing wargs, and god-like dragons. Pittsburgh. A city that has been stranded deep in virgin elfin forest to stave off an invasion by the merciless oni. Its population of sixty thousand humans and a handful of elves are pitted in war that will only end in genocide. Winter is coming. Supplies are running low. All political ties are fraying. Hidden somewhere in Pittsburgh's crumbling neighborhoods, a vanguard of oni are growing in number and attacking from the shadows.

Girl genius Tinker was once a human orphan, growing up on the Pittsburgh streets. Now she's an elf princess with all the bells and whistles. She rules over a melting pot of humans, elves, half-oni, and the crow-like tengu. Tinker is determined to make her city a place of freedom. She's going to have to kick butt and take names. Seven elf children are already missing -- and the oni eat their prisoners when they outlive their usefulness.

About Wen Spenser:
“Wit and intelligence inform this off-beat, tongue-in-cheek fantasy…. Furious action…good characterization, playful eroticism and well-developed folklore…lift this well above the fantasy average …. Buffy fans should find a lot to like in the book's resourceful heroine.”—Publishers Weekly on series debut Tinker

“Spencer's intertwining of current Earth technology and otherworldly elven magic is quite ingenious.” –Booklist on the Elfhome series

John W. Campbell Award Winner Wen Spencer resides in paradise in Hilo, Hawaii with two volcanoes overlooking her home. Spencer says that she often wakes up and exclaims "Oh my god, I live on an island in the middle of the Pacific!" This, says Spencer, is a far cry from her twenty years of living in land-locked Pittsburgh. According to Spencer, she lives with "my Dali Llama-like husband, my autistic teenage son, and two cats (one of which is recovering from mental illness.) All of which makes for very odd home life at times." Spencer's love of Japanese anime and manga flavors her writing. The Elfhome series opener, Tinker, won the 2003 Sapphire Award for Best Science Fiction Romance and was a finalist for the Romantic Times Reviewers' Choice Award for Fantasy Novel. Wolf Who Rules, the sequel to Tinker, was chosen as a Top Pick by Romantic Times and given their top rating of four and a half stars. Other Baen books include space opera thriller Endless Blue and the forthcoming Eight Million Gods.
Loading...
or
Not Currently Available for Direct Purchase