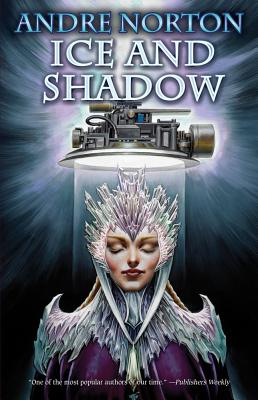 Two bestselling novels of science fiction adventure from storyteller Andre Norton together for the first time, Ice Crown and Brother to Shadows. Ice Crown:
Roane, a young archaeologist, makes planetfall on a previously off-limits world where the inhabitants have been implanted with false memories and conditioned to obey their oligarchic masters. Now Roane must fight to save the enslaved populace and her own inner essence by finding a powerful artifact that could bring new freedom to a planet that has spent eons in darkness. Brother to Shadows:
Jofre, a young initiate to the assassin's guild in a far future world, is betrayed and cast out by a corrupt nemesis-a priest with designs upon powerful, near-magic technology secreted somewhere on the planet. To save himself, Jofre must team with a crafty reptilian alien ally to find the hidden hoard of the Forerunners if he is to redeem himself and go forth and to find his destiny beyond the stars.
About Andre Norton:
"The Grand Dame of Science Fiction..."--Time "One of the all-time masters."--Peter Straub "Andre Norton is a superb storyteller whose skill draws the reader completely into a fantastic other world..."--Chicago Tribune "Norton's renowned story-telling magic is present in abundance . . ."--Future Retrospective