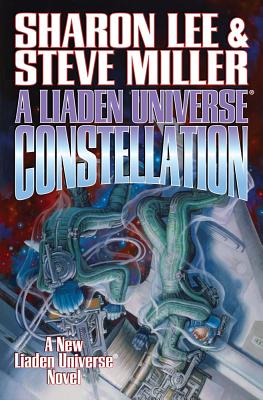 First collection in one volume.  Seventeen short tales of the Liaden Universe® brought together for the first time. Space opera and romance on a grand scale in a galaxy full of interstellar trading clans.

Thirty-three shorter tales of the Liaden Universe® brought together for the first time in two mega-volumes.  Seventeen tales to start with in Volume One!

Since 1995, Sharon Lee and Steve Miller also created shorter tales, illuminating additional facets of the Liaden experience. Here is a vast tapestry of tales of the scouts, artists, traders, priestesses, sleight of hand magicians, and pilots who fill the Liaden Universe® with the excitement, action, and romance that readers of the hit series have come to adore.

Celebrating 25 Years of the Liaden Universe®

About A Liaden Universe Constellation : Volume 1:
“. . . adds a bit of sparkle to ordinary life. . . . This series [is] . . . the premier place to find good romantic SF adventure. . . . strong characters finding their own way (and, often, each other) in an action-packed galaxy of worlds. . . . Every story stands on its own; readers don’t have to be familiar with the Liaden universe. Those who have had the pleasure, though, will find many connections to existing tales.” —Analog on A Liaden Universe Constellation: Volume 1.

“These authors consistently deliver stories with a rich, textured setting, intricate plotting, and vivid, interesting characters from fully-realized cultures, both human and alien, and each book gets better.”–Elizabeth Moon