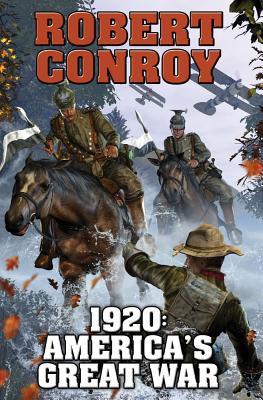 By the author of breakout WW II era alternate history Himmler's War and Rising Sun, a compelling alternate history thriller. After winning WW I, Germany invades America in 1920, marching through California and Texas as a desperate nation resists. Consider another 1920: Imperial Germany has become the most powerful nation in the world. In 1914, she had crushed England, France, and Russia in a war that was short but entirely devastating. By 1920, Kaiser Wilhelm II is looking for new lands to devour. The United States is fast becoming an economic super-power and the only nation that can conceivably threaten Germany. The U.S. is militarily inept, however, and is led by a sick and delusional president who wanted to avoid war at any price. Thus, Germany is able to ship a huge army to Mexico to support a puppet government. Her real goal: the invasion and permanent conquest of California and Texas. America desperately resists as the mightiest and most brutal army in the world in a battle fought on land, at sea, and in the air as enemy armies savagely marched up on California, and move north towards a second Battle of the Alamo. Only the indomitable spirit of freedom can answer the Kaiser's challenge. About 1920: America's Great War:
"Conroy offers up a believable scenario and heroics galore on the part of the good guys, ranging from trench fighting to the first tank charge. . . .good fun for alternate history buffs."--Library Journal About Robert Conroy's Rising Sun
"Conroy extrapolates a new and militarily plausible direction for WWII . . . A thrilling adventure."--Booklist

About Robert Conroy's Himmler's War
" Conroy] adds a personal touch to alternate history by describing events through the eyes of fictional characters serving on the front lines. VERDICT: Historical accuracy in the midst of creative speculation makes this piece of alternate history believable."-Library Journal About Red Inferno: 1945
"An ensemble cast of fictional characters. . . and historical figures powers the meticulously researched story line with diverse accounts of the horrors of war, making this an appealing read for fans of history and alternate history alike."--Publishers Weekly " E]ngrossing and grimly plausible. . .the suspense holds up literally to the last page."--Booklist About 1945:
" moving and thought-provoking. . ."--Publishers Weekly "Realistic. . ."--Booklist About 1942
." . .fans of Tom Clancy and Agent Jack Bauer should find a lot to like here."--Publishers Weekly "A significant writer of alternate history turns here to the popular topic of Pearl Harbor, producing. . . this rousing historical action tale."--Booklist "A high-explosive what-if, with full-blooded characters."--John Birmingham, bestselling author of Without Warning About 1901:
." . .cleverly conceived. . .Conroy tells a solid what-if historical."--Publishers Weekly ." . . likely to please both military history and alternative history buffs."--Booklist

Robert Conroy is the author a run of hugely popular alternate history novels, including Himmler's War and Rising Sun for Baen Books. His 1942, which is set within a Japanese conquest of Hawaii, won the prestigious Sidewise Award for alternate histories. Conroy has written for Military History magazine and has traveled extensively in Europe where he's taken a special interest in battlefields, historical collections and castles. After a first career in business, Conroy has turned his lifelong passion for writing and military history into an immensely satisfying new occupation. He is married, lives in southeastern Michigan, and, when not writing, teaches business and economic history at a local college.
Loading...
or
Not Currently Available for Direct Purchase