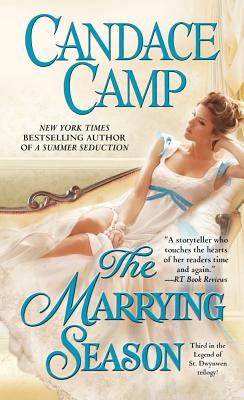 The third novel in the New York Times bestselling Legend of St. Dwynwen trilogy depicts the delicious romance between a haughty lady and the gentleman who coaxes her to drop her guard at last.

Her brother Alec, Earl of Rawdon, has joyously wed his true love, but Genevieve Stafford anticipates no such unabashed emotion on her wedding day. The icily beautiful aristocrat is to marry Lord Dursbury, and love is not part of the bargain. But when someone frames Genevieve in a cruel scheme, the scandal shatters her engagement and her respectability. So why has Sir Myles Thorwood gallantly offered to marry her? Handsome, flirtatious Myles is her opposite in many ways, yet he understands her the way no other man ever has. Trumping her expectations of a loveless marriage, Myles shows Genevieve just what it means to be man and wife . . . but are his attentions mere kindness or true devotion? Will their passion endure for more than a passing season?

Candace Camp is a New York Times and USA TODAY bestselling author of more than sixty novels of contemporary and historical romance, including the bestselling Regency romances Enraptured, Treasured, and The Marrying Season. She is also the author of The Mad Morelands series, Before the Dawn, and Heartwood. She grew up in Texas in a newspaper family, which explains her love of writing, but she earned a law degree and practiced law before making the decision to write full time. She has received several writing awards, including the RT Book Reviews Career Achievement Award. Visit her at Candace-Camp.com.
Loading...
or
Not Currently Available for Direct Purchase