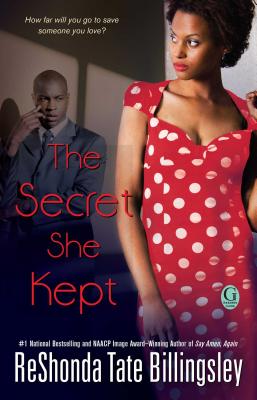 The Secret She Kept

National bestseller ReShonda Tate Billingsley spins an irresistible story of romance and faith that will touch every reader's heart.

How far will you go to save someone you love and trust when they’ve kept a dangerous secret for years? That’s the question facing Lance Kingston, a successful Houston magazine executive whose recent marriage to beautiful, high-powered attorney Tia Jiles seemed to promise a bright future for both of them. But under the surface, a fierce and frightening storm was brewing. That’s because Tia never revealed to Lance what she and her family have known since Tia was seventeen—she has an illness that takes over her mind, transforming her into a raging, violent woman hell-bent on destruction. Bipolar disorder. Schizophrenia. Or crazy, as Lance’s grandmother continually reminds him. “Crazy leaves clues,” she told him point-blank, and perhaps Lance should have listened. Tia’s mother tries to pray the problem away . . . and Tia’s doctors can’t help her if she won’t do what they advise. Now there’s more than their marriage and Tia’s survival at stake: Tia is pregnant, and Lance will stop at nothing to keep his troubled wife and unborn daughter safe. But at what price?

ReShonda Tate Billingsley’s #1 nationally bestselling novels include Let the Church Say Amen, I Know I’ve Been Changed, and Say Amen, Again, winner of the NAACP Image Award for Outstanding Literary Work. Her collaboration with Victoria Christopher Murray has produced four hit novels, Sinners & Saints, Friends & Foes, A Blessing & a Curse, and Fortune & Fame. BET released a movie in 2013 based on ReShonda’s book Let the Church Say Amen in which she had a minor role. She also had a role in the made-for-TV movie The Secret She Kept based on her book of the same title. Visit ReShondaTateBillingsley.com, meet the author on Facebook at ReShondaTateBillingsley, or follow her on Twitter @ReShondaT.
Loading...
or
Not Currently Available for Direct Purchase