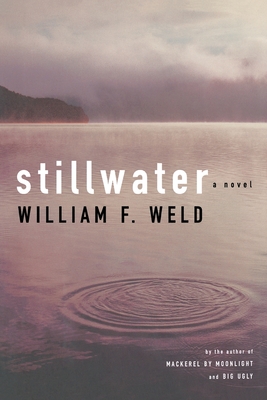 In 1938, five towns in western Massachusetts were flooded to create a huge reservoir.

In this beautifully rendered novel of coming of age, of loyalty and betrayal, good and evil, and of bravery and an abiding love, Stillwater marks a significant literary step forward for William Weld in what has already emerged as a notable writing career.

Fifteen-year-old Jamieson, who lives on a farm with his ironic and strong-willed grandmother, watches life unravel for the men and women whose world is about to be obliterated. Some take refuge in whiskey or denial, some give in to despair, some preach hypocrisy -- and some decide to turn a profit on their fellow citizens' misfortunes.

Jamieson falls in love for the first and hardest time with the unforgettable Hannah, a dreamy girl from the poor farm. She enriches his sense of what is being lost by recalling lives that were lived in the Valley during the French and Indian War, the insurrection of Daniel Shays, and the War between the States. Jamieson feels in his bones that the living are surrounded by the dead.

As the seasons turn during the towns' final year, events spin out of control. Church services are supplanted by pagan rituals in the woods, public morality is undone by the exposure of a "disorderly house," and any semblance of a normal life on the farms is undermined by the impending flood. In September, the hurricane of 1938 completes the Valley's destruction.

As Jamieson is losing the world of his boyhood, it is Hannah who opens his eyes to wider possibilities and helps him taste a measure of revenge on the men who sold out the Valley towns. It is not so difficult, after all, for the living and the dead to change places.

Weld has been praised by the New York Times for his "writer's eye and ear." Stillwater illuminates nature's magnificence, man's inhumanity, people's courage, and the destiny of place that is characteristic of America.

William F. Weld is an attorney, author, and politician who served as Governor of Massachusetts from 1991 to 1997. He is the author of numerous books, including Mackerel By Moonlight and Stillwater.
Loading...
or support indie stores by buying on