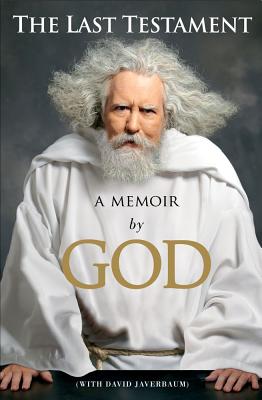 Over the course of his long and distinguished career, God has literally seen it all. And not just seen. In fact, the multitalented deity has played a pivotal role in many major events, including the Creation of the universe, the entirety of world history, and the successful transitioning of American Idol into the post–Simon Cowell era. Sometimes preachy, sometimes holier-than-thou, but always lively, The Last Testament is the ultimate celebrity autobiography.

Praise For The Last Testament: A Memoir…

“Presented as ‘A Memoir by God,’ the book comes divided into chapters and numbered verses like the Bible, if the Bible were narrated by Mel Brooks on crack-laced manna. It’s a bawdy circus of theological vaudeville—Shadrach, Meshach and To-bed-we-go!—determined to sacrifice every sacred cow on the altar of farce.”—Ron Charles, The Washington Post

“The Last Testament is billed as a message from God as transcribed by David Javerbaum, the former head writer and executive producer of ‘The Daily Show With Jon Stewart,’ whose specialty is chutzpah. With no apparent qualms Mr. Javerbaum steps into the infinitely big shoes of the Almighty to deliver a series of pronouncements, gags, parodies of Biblical passages and even a 12-step program envisioned from God’s point of view. . . . The Last Testament is fearless . . . a recklessly funny set of gags about all things religious and quite a few things secular too.”—Janet Maslin, The New York Times

“I can’t be sure, but I think the famously blasphemous Mark Twain (who once said he didn’t want to go to heaven because he hated harp music) would have chuckled his way through Javerbaum’s book. Maybe even snorted. Because it’s very funny. Offensive to some, for sure, but very funny.”—A.J. Jacobs for The Globe & Mail

“A ‘memoir’ by God [The Last Testament] does what The Daily Show does so well—it satirizes religion by both taking it seriously and not taking it seriously at all, using humor to both point out the inconsistencies of the holiest texts and to describe God’s codependent relationship with celebrities.”—Salon.com

“This book plays spin doctor for the Big Guy, in the form of a really new testament. Author David Javerbaum, formerly a writer and producer for 'The Daily Show With Jon Stewart,' brings that show’s arch snappiness to his task, laying out what God really had in mind . . . If you’re a churchgoer you might ask, well, isn’t this sacrilegious? In many places, decidedly so. And if the human temptation is to continually imagine God in our own image (face it, you think God agrees with your positions on abortion, taxes and political parties, don’t you?), The Last Testament does so with a vengeance, quoting a pop-culture-savvy Creator who despises Sarah Palin and holds reliably progressive social views. . . . People of faith should be glad when religious themes show up in popular discourse, even if it’s for a cheap joke. Better to be satirized than to be ignored. And, of course, the premise of 'The Daily Show' is in effect: Satire can be the best vehicle for truth.”—Buffalo News


“Oh, God . . . There are enough laughs here, not to mention a dazzling underlying knowledge of theology, to give plenty of props to Javerbaum.”—Booklist (starred review)

“A blithely blasphemous satire of monotheism. . . . Adherents of every Abrahamic faith will find plenty of hilarious, offensive manna for thought in these revelations.”—Publishers Weekly

"Absurdity reigns in The Last Testament. . . . A wickedly funny introduction to the opinions and modus operandi of God, 'King of the Universe.'"—ShelfAwareness.com

“I want every Christian I know to have a copy of this book.”—NewAtheism.Blogspot.com

“No doubt the old rogue savors the irony that the most appreciative readers of his Last Testament are likely to be atheists. He might even have written it specially for them.”—The Atheist Conservative.com

“There's something pitch-perfect about the tone and tenor of The Last Testament . . . Readers from every religion will find things to laugh at and/or be offended by in this book.”—January magazine

“An irreverent look at Judaism, Christianity and Islam, sparing no religion, or religious leaders, any barbs.”—The Christian Post

“[David Javerbaum] takes ghost writing to new heights. . . . The entire book is written to provoke laughter. That isn’t a bad thing in a world where we take ourselves far too seriously, most of the time.”—Ottawa Citizen

God has been grabbing headlines ever since first creating the universe. Indeed, the multi-talented deity has been involved in the development of every single thing that has ever happened, including the Crusades, plate tectonics, and Seinfeld. His previous serious works as an author, The Old Testament, The New Testament, and The Koran, have sold an impressive 5 billion copies, with the first two in particular coming to be collectively regarded as something of a bible of their field.

David Javerbaum is a former head writer and executive producer of The Daily Show with Jon Stewart. He is the coauthor of that show’s bestsellers, America: The Book and Earth: The Book, and author of the pregnancy parody What to Expect When You’re Expected.