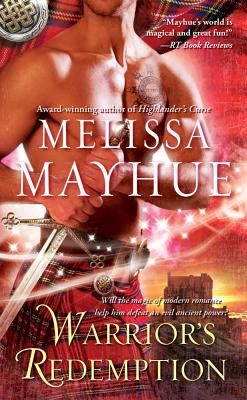 MALCOLM MACDOWYLT sees himself a failed warrior, haunted by the death of the woman he married to become laird of Clan MacGahan. Neither his Viking heritage nor his claim to descend from Norse gods can restore his confidence in his ability to protect his people. His sister is held captive, her life in jeopardy, and his Magically powerful half brother wants him dead. The last thing he needs is more responsibility, but that’s exactly what he gets when his Faerie mother-in-law arrives seeking justice for her daughter in the form of an enticing woman from seven hundred years in the future.

DANIELLE DEARMON has waited fifteen years to discover the life she is supposed to live. She just never dreamed she’d end up in the thirteenth century with a handsome Scot bent on saving everyone but himself. With the lives of those most dear to him hanging in the balance, Malcolm sets out to battle a powerful evil magic, only to learn that the redemption he seeks exists in the arms of the woman he loves.

Melissa Mayhue is the award-winning author of the Daughters of the Glen series, which includes Thirty Nights with a Highland Husband, Highland Guardian, Soul of a Highlander, A Highlander of Her Own, A Highlander's Destiny, A Highlander's Homecoming, Healing the Highlander, and A Highlander's Curse. She is also the author of the Warrior series and the Magic of Time series. She and her family live in Colorado in the shadow of the beautiful Rocky Mountains with three insanely spoiled dogs, one domineering cat, a turtle with an attitude, and way too many fish in their aquarium. Visit her website at MelissaMayhue.com.
Loading...
or
Not Currently Available for Direct Purchase