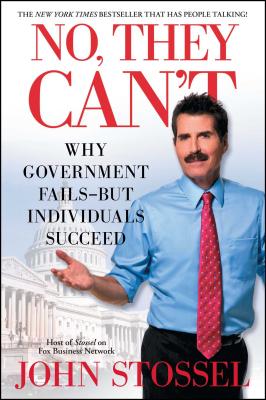 Politicians—and we voters—can dream of guaranteed incomes or green energy. But the mature response to cries of “Yes, we can!” should be “No, we can’t”—not when “we” means government. There is nothing that government can do that we cannot do better as free individuals. —John Stossel in No, They Can’t

John Stossel debunks the most revered of society’s sacred cows in this spirited New York Times bestseller: our belief that government can solve our problems. Stossel insists that we discard the myth of the “perfect” government—left or right—and retrain our brain to rethink our lives as independent individuals in light of such topics as

New York Times bestselling author John Stossel hosts his own one-hour weekly Fox Business Network show, called Stossel, and a series of one-hour specials on Fox News. He also appears regularly on The O’Reilly Factor and on other Fox News shows. During three decades in journalism, Stossel has received numerous honors and awards. He is a nineteen-time Emmy winner and a five-time honoree for excellence in consumer reporting by the National Press Club.
Loading...
or support indie stores by buying on