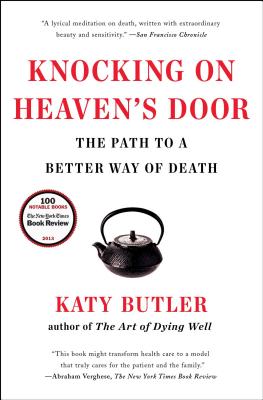 The Path to a Better Way of Death

“Not only has Katy Butler dug deep and given us a beautiful and compelling look into the issues that her parents faced when approaching the end of their lives, she opens the discussion around how skewed our medical establishment has become in its practice of resuscitating at any cost. Knocking on Heaven's Door probes through Butler's personal experience and examines the difficulties individuals and families now face in choosing their own path to dying. This is an important book with a powerful message that begs to be read and shared'a 'tipping point' kind of book!”
— Sheryl Cotleur, Copperfield's Books, Sebastopol, CA
View the List

“A thoroughly researched and compelling mix of personal narrative and hard-nosed reporting that captures just how flawed care at the end of life has become” (Abraham Verghese, The New York Times Book Review).

This bestselling memoir—hailed a “triumph” by The New York Times—ponders the “Good Death” and the forces within medicine that stand in its way.

Award-winning journalist Katy Butler was living thousands of miles from her aging parents when the call came: her beloved seventy-nine-year-old father had suffered a crippling stroke. Katy and her mother joined the more than 28 million Americans who are shepherding loved ones through their final declines.

Doctors outfitted her father with a pacemaker, which kept his heart going while doing nothing to prevent a slide into dementia, near-blindness, and misery. When he said, “I’m living too long,” mother and daughter faced wrenching moral questions. Where is the line between saving a life and prolonging a dying? When do you say to a doctor, “Let my loved one go?”

When doctors refused to disable the pacemaker, condemning her father to a lingering death, Butler set out to understand why. Her quest had barely begun when her mother, faced with her own grave illness, rebelled against her doctors, refused open-heart surgery, and met death the old-fashioned way: head-on.

Part memoir, part medical history, and part spiritual guide, Knocking on Heaven’s Door is a map through the labyrinth of a broken medical system. Technological medicine, obsessed with maximum longevity, is creating more suffering than it prevents. Butler chronicles the rise of Slow Medicine, a movement bent on reclaiming the “Good Deaths” our ancestors prized. In families, hospitals, and the public sphere, this visionary memoir is inspiring the difficult conversations we must have to light the path to a better way of death.

Praise For Knocking on Heaven's Door: The Path to a Better Way of Death…

“Knocking on Heaven’s Door is a thoroughly researched and compelling mix of personal narrative and hard-nosed reporting that captures just how flawed care at the end of life has become."
— Abraham Verghese

“This is a book so honest, so insightful and so achingly beautiful that its poetic essence transcends even the anguished story that it tells. Katy Butler’s perceptive intellect has probed deeply, and seen into the many troubling aspects of our nation’s inability to deal with the reality of dying in the 21st century: emotional, spiritual, medical, financial, social, historical and even political. And yet, though such valuable insights are presented with a journalist’s clear eye, they are so skillfully woven into the narrative of her beloved parents’ deaths that every sentence seems to come from the very wellspring of the human spirit that is in her."
— Dr. Sherwin B. Nuland, author of How We Die: Reflections of Life’s Final Chapter

“This is some of the most important material I have read in years, and so beautifully written. It is riveting, and even with parents long gone, I found it very hard to put down. ... I am deeply grateful for its truth, wisdom, and gorgeous stories—some heartbreaking, some life-giving, some both at the same time. Butler is an amazing and generous writer. This book will change you, and, I hope, our society."
— Anne Lamott

"[An] unflinching look at America's tendency to overtreat [that] makes a strong case for the 'slow medicine' movement, which recognizes that 'dying can be postponed, but aging cannot be cured.'"
— Zaineb Mohammed

"[A] deeply felt book...[Butler] is both thoughtful and passionate about the hard questions she raises — questions that most of us will at some point have to consider. Given our rapidly aging population, the timing of this tough and important book could not be better."
— Laurie Hertzel

"Butler argues persuasively for a major cultural shift in how we understand death and dying, medicine and healing. At the same time, she lays her heart bare, making this much more than ideological diatribe. Readers…should be sure to pick up this book. It is one we will be talking about for years to come.”
— Kelly Blewett

“ A pitch-perfect call for health care changes in the mechanized deaths many suffer in America.”
— Roberta E. Winter

"This braid of a book...examines the battle between death and the imperatives of modern medicine. Impeccably reported, Knocking on Heaven's Door grapples with how we need to protect our loved ones and ourselves."
— More Magazine

"A forthright memoir on illness and investigation of how to improve end-of-life scenarios. With candidness and reverence, Butler examines one of the most challenging questions a child may face: how to let a parent die with dignity and integrity. Honest and compassionate..."
— Kirkus Reviews

“Katy Butler’s science background and her gift for metaphor make her a wonderfully engaging storyteller, even as she depicts one of our saddest but most common experiences: that of a slow death in an American hospital. Knocking on Heaven’s Door is a terrible, beautiful book that offers the information we need to navigate the complicated world of procedure and technology-driven health care.”
— Mary Pipher

"Katy Butler's new book—brave, frank, poignant, and loving—will encourage the conversation we, as a society, desperately need to have about better ways of dying. From her own closely-examined personal experience, she fearlessly poses the difficult questions that sooner or later will face us all.”
— Adam Hochschild

“Intimate and wise, heartbreakingly compassionate, and critically helpful, this is a truly important work that I hope will be widely read. We have lost our way and Katy Butler’s impeccably researched and powerful tale will help eliminate much suffering on the passage to the mystery of death.”
— Dr. Jack Kornfield

"This is the most important book you and I can read. It is not just about dying, it is about life, our political and medical system, and how to face and address the profound ethical and personal issues that we encounter as we care for those facing dying and death. [This book's] tenderness, beauty, and heart-breaking honesty matches the stunning data on dying in the West. A splendid and compassionate endeavor."
— Joan Halifax, PhD, Founding Abbot, Upaya Institute/Zen Center and Director, Project on Being with Dying: Cultivating Compassion and Fearlessness in the Presence of Death

"This beautifully written and well researched book will take you deep into the unexplored heart of aging and medical care in America today. With courage, unrelenting honesty, and deepest compassion, ... Knocking on Heaven’s Door makes it clear that until care of the soul, families, and communities become central to our medical approaches, true quality of care for elders will not be achieved."
— Dennis McCullough

“This book stands as an act of profound courage. It is brutally honest about the nature of relationships, searingly insightful in the potential of healing, and shines and intense light on our ignorance…For that alone, it is an important one to read.”
— 108ZenBooks.com

“Knocking On Heaven’s Door is a disquieting book, and an urgent one. Against a confounding bioethical landscape, Katy Butler traces the odyssey of her parents’ final years with honesty and compassion. She does a great service here, skillfully illuminating issues most of us are destined to face sooner or later. I cannot imagine a finer way to honor the memory of one’s parents than in such a beautifully rendered account.”
— Alexandra Styron

"Butler’s advice is neither formulaic nor derived from pamphlets...[it] is useful, and her challenge of our culture of denial about death necessary...Knocking on Heaven’s Door [is] a book those caring for dying parents will want to read and reread. [It] will help those many of us who have tended or will tend dying parents to accept the beauty of our imperfect caregiving."
— Suzanne Koven

"Knocking on Heaven's Door is more than just a guide to dying, or a personal story of a difficult death: It is a lyrical meditation on death written with extraordinary beauty and sensitivity."
— San Francisco Chronicle

"[Knocking on Heaven's Door is] a triumph, distinguished by the beauty of Ms. Butler's prose and her saber-sharp indictment of certain medical habits. [Butler offers an] articulate challenge to the medical profession: to reconsider its reflexive postponement of death long after lifesaving acts cease to be anything but pure brutality."
— Abigail Zuger, MD

"A stunning book, truthful and its dignified, and it could be a conversation-starter. If there's a need for that in your family -- or if you only want to know what could await you -- then read Knocking on Heaven's Door. You won't regret it."
— Appeal Democrat

“Astonishingly beautiful. [Butler’s] honest and challenging book is an invitation to all people—Christians included—to reconsider the meaning of drawn out deaths and extreme measures in a historic—and eternal—perspective.”
— Rachel Marie Stone

Katy Butler’s articles have appeared in The New York Times Magazine, The Best American Science Writing, and The Best American Essays. A finalist for a National Magazine Award, she lives in Northern California. She is the author of Knocking on Heaven’s Door and The Art of Dying Well.
Loading...
or support indie stores by buying on