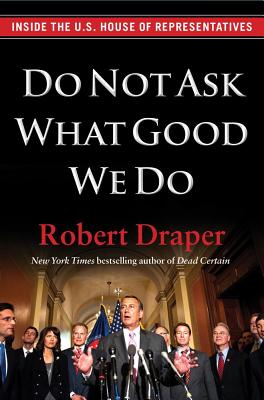 Do Not Ask What Good We Do

Inside the U.S. House of Representatives

The U.S. House of Representatives—a large, often unruly body of men and women elected every other year from 435 distinct microcosms of America—has achieved renown as “the people’s House,” the world’s most democratic institution, and an acute Rorschach of biennial public passions. In the midterm election year 2010, recession-battered Americans expressed their discontent with a simultaneously overreaching and underperforming government by turning the formerly Democratically controlled House over to the Republicans. Among the new GOP majority were eighty-seven freshmen, many of them political novices with Tea Party backing who pledged a more open, responsive, and fiscally thrifty House. What the 112th Congress instead achieved was a public standing so low—a ghastly 9 percent approval rating— that, as its longest-serving member, John Dingell, would dryly remark, “I think pedophiles would do better.” What happened?

Robert Draper explores this question just as he examined the Bush White House in his 2007 New York Times bestselling book Dead Certain: The Presidency of George W. Bush—by burrowing deeply inside the subject, gaining cooperation of the major players, and producing a colorful, unsparingly detailed, but evenhanded narrative of how the House of Representatives became a house of ill repute. Draper’s cast of characters spans the full spectrum of political experience and ideologies—from the Democrat Dingell, a congressman since 1955 (though elbowed out of power by the party’s House leader, Nancy Pelosi), to Allen West, a black Republican Tea Party sensation, former Army lieutenant colonel, and political neophyte with a talent for equal opportunity offending. While unspooling the boisterous, at times tragic, and ultimately infuriating story of the 112th Congress, Draper provides unforgettable portraits of Gabrielle Giffords, the earnest young Arizona congresswoman who was gunned down by a madman at the beginning of the legislative session; Anthony Weiner, the Democrats’ clown prince and self-made media star until the New Yorker self-immolated in a sex scandal; the strong-willed Pelosi and her beleaguered if phlegmatic Republican counterpart, House Speaker John Boehner; the affable majority whip, Kevin McCarthy, tasked with instilling team spirit in the iconoclastic freshmen; and most of all, the previously unknown new members who succeeded in shoving Boehner’s Republican Conference to the far right and thereby bringing the nation, more than once, to the brink of governmental shutdown or economic default.

In this lively work of political narrative, Draper synthesizes some of the most talked-about breaking news of the day with the real story of what happened behind the scenes. This book is a timely and masterfully told parable of dysfunction that may well serve as Exhibit A of how Americans lost faith in their democratic institutions.

“Congress will rise June 1st, as most of us expect. Rejoice when that event is ascertained. If we should finish and leave the world right side up, it will be happy. Do not ask what good we do: that is not a fair question, in these days of faction.” —Congressman Fisher Ames, May 30, 1796

In Do Not Ask What Good We Do, Robert Draper captures the prophetic sentiment uttered by Fisher Ames over two centuries ago. As he did in writing about President George W. Bush in Dead Certain, Draper provides an insider’s book like no one else can—this time, inside the U.S. House of Representatives. Because of the bitterly divided political atmosphere we live in, because of the combative nature of this Congress, this literary window on the backstage machinations of the House is both captivating and timely—revealing the House in full, from the process of how laws are made (and in this case, not made) to the most eye-popping cast of lawmakers Washington has ever seen.

Praise For Do Not Ask What Good We Do: Inside the U.S. House of Representatives…

“Vivid . . . Compelling . . . [Draper’s] refreshingly balanced account captures the drama of one of Congress’s most combative and maddeningly frustrating years in memory.”

“Colorful . . . An engaging and often funny chronicle of the year in the House of Representatives following the Tea Party–powered 2010 elections.”

“Superb . . . A rich and deeply reported look at the House Republicans who took over the chamber after the 2010 elections.”


“A gripping and fast-paced narrative.”

Robert Draper is a contributing writer to the New York Times Magazine and National Geographic and a correspondent to GQ. He is the author of several books, most recently the New York Times bestseller Dead Certain: The Presidency of George W. Bush. He lives in Washington, DC.
Loading...
or
Not Currently Available for Direct Purchase