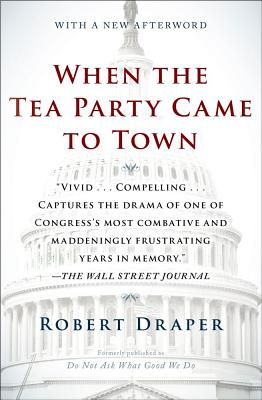 When the Tea Party Came to Town

Inside the U.S. House of Representatives' Most Combative, Dysfunctional, and Infuriating Term in Modern History

In When the Tea Party Came to Town, Robert Draper delivers the definitive account of what may turn out to be the worst congressional term in United States history. As he did in writing about President George W. Bush in Dead Certain, Draper burrows deep inside his subject, gaining cooperation from the major players, and provides an insider's book like no one else can--a colorful, unsparingly detailed, but evenhanded narrative of how the House of Representatives became a house of ill repute. Because of the bitterly divided political atmosphere in which we live, this literary window on the backstage machinations of the House of Representatives is both captivating and timely--revealing the House in full, from the process of how laws are made (and in this case, not made) to the most eye-popping cast of lawmakers Washington has ever seen.

Praise For When the Tea Party Came to Town: Inside the U.S. House of Representatives' Most Combative, Dysfunctional, and Infuriating Term in Modern History…

“Vivid . . . Compelling . . . [Draper’s] refreshingly balanced account captures the drama of one of Congress’s most combative and maddeningly frustrating years in memory.”

“Colorful . . . An engaging and often funny chronicle of the year in the House of Representatives following the Tea Party–powered 2010 elections.”

“Superb . . . A rich and deeply reported look at the House Republicans who took over the chamber after the 2010 elections.”


“A gripping and fast-paced narrative.”