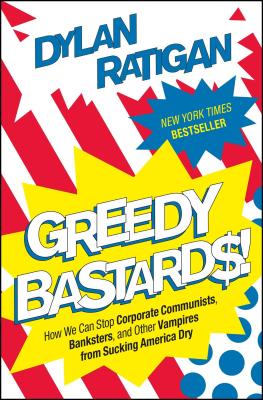 DYLAN RATIGAN’S mission is to uncover never-before-seen solutions to the most pressing issues of our time: government corruption, corporate communism, an ailing health care system, an age-old dependency on foreign oil, and a broken educational system. In this groundbreaking book, Ratigan makes a case that America has the opportunity to prosper, but only by setting clear goals. Ratigan believes that this country, now more than ever, needs passionate debate and smart policy, a brazen willingness to scrap what doesn’t work, and the entrepreneurial spirit to try what does. Ratigan has compiled brash and fresh solutions for building a new and better America, and with this book he has started the debate America deserves.

Since late September 2011, more than 300,000 people have pledged support, millions of dollars have been raised, and an organization with a staff of a dozen people has been formed under Ratigan’s leadership to pursue the singular objective to pass a 28th Constitutional amendment to separate business and state.


“Greedy Bastards is superb. Dylan’s policy recommendations track with what the Committee for Economic Development has been saying on: health care, the federal deficit, corporate governance, education, a consumption tax, and campaign finance reform. His explanations are clear, and he nails health care with his criticism of the fee-for-service model. Greedy Bastards deserves wide readership!”—Charles Kolb, President of the Committee on Economic Development


“Greedy Bastards is a fantastic book! It has the perfect tone and is completely convincing.” —Lawrence Lessig, Director of the Edmond J. Safra Foundation Center for Ethics at Harvard University and Professor of Law at Harvard Law School

“Greedy Bastards helps us better understand why we suffer recurrent, intensifying financial crises. First, cheating has become the dominant strategy in finance. Second, cheating is dominant because finance CEOs create such intensely perverse incentives that fraud becomes endemic.”— Bill Black, author of The Best Way to Rob a Bank is to Own One and associate professor of economics and law at the University of Missouri-Kansas City