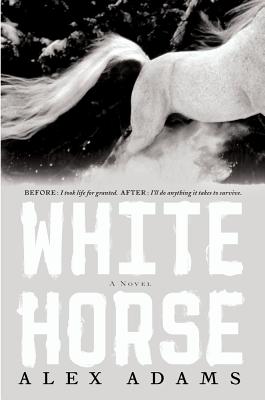 White Horse is the first book in an absolutely unique debut trilogy—a post-apocalyptic thriller chronicling one woman’s quest to nurture those she holds dear against the backdrop of a shocking, new world.

The world has ended, but her journey has just begun.

Thirty-year-old Zoe leads an ordinary life until the end of the world arrives. She is cleaning cages and floors at Pope Pharmaceuticals when the president of the United States announces that human beings are no longer a viable species. When Zoe realizes that everyone she loves is disappearing, she starts running. Scared and alone in a shockingly changed world, she embarks on a remarkable journey of survival and redemption. Along the way, Zoe comes to see that humans are defined not by their genetic code, but rather by their actions and choices. White Horse offers hope for a broken world, where love can lead to the most unexpected places.

Praise For White Horse: A Novel…

“Adams’ fantasy is brilliant! It’s McCarthy’s The Road on hope steroids. Adams’ narrative is the prose of the world’s destruction, beautiful yet horrible. Her amazing characters are full of both hope and hopelessness in the face of death—and worse. This is what apocalyptic fiction will aspire to be from now on.”

“Adams has an excellent sense of timing, delivering gasp-inducing moments that punctuate her nightmare with verve. But it’s Zoe’s clear-eyed sense of self-preservation that will keep readers waiting for Adams’ follow-up.”

“Written with such skill and confidence that it sits easily in the pantheon of post-apocalyptic thrillers alongside the likes of Justin Cronin and Stephen King. . .The first installment in a bold new trilogy, White Horse is the perfect start to a series that promises to both terrify and thrill.”

“Kept me up way too late at night, avidly racing to the thrilling end.”
— Kaye George, Suspense Magazine

“Alex Adams' debut, White Horse, is the first in a brilliant trilogy which will no doubt be ranked among the great fantasy novels.”

“It draws to a compelling pause, with a pair of revelations in the final pages that should spur readers to a sequel. Adams has fashioned a macabre landscape in which she explores fundamental questions about what it means to be human, with a compelling protagonist and narrator as our guide.”

“A cat-and-mouse tale of murder and pursuit . . . Adams' debut novel adds another dimension to dystopian fiction.”

“Suspenseful, fast-paced, and boasting solid character development, this is a much better than average post-apocalyptic novel.”

“Alex Adams delivers a beautifully written page-turner that brings new life to post-apocalyptic fiction and the hero’s journey. I couldn’t stop reading, and couldn’t stop wondering what I would do in the world of White Horse. Gorgeously, unrelentingly, dark and gripping.”
— Eleanor Brown, New York Times bestselling author of The Weird Sisters

“A wonderful debut . . . A strong outing for the first book of a trilogy. I am anxiously awaiting the next two.”

“This book does not disappoint. It was absolutely incredible.”

“Alex Adams’ debut novel, White Horse, is a riveting look at future where the world has ended, and what humans become afterwards.”

“A hugely horrifying and emotional apocalyptic novel. White Horse is massively gripping . . .The narrative is perfectly paced: ‘then’ chapters drip-feed enough information to keep us reading without revealing the disease’s origin, and the ‘now’ telling a tense tale of survival. Pregnant Zoe is a fantastic lead.”

“Dark, gritty, and eerily real. [Adams] immediately captured my attention with her riveting world-building and her raw, fleshed out characters.”

“By far the most accomplished book I’ve encountered this year . . . White Horse will haunt you long after you close the back cover.”

Alex Adams was born in Auckland, New Zealand, and currently lives in Portland, Oregon, with her family. Visit her website at AlexAdamsBooks.com.
Loading...
or
Not Currently Available for Direct Purchase