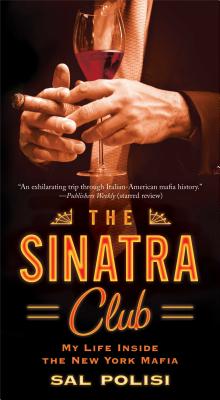 My Life Inside the New York Mafia

An “exhilarating trip through Italian-American Mafia history” (Publishers Weekly, starred review) this is Sal Polisi’s riveting and darkly hilarious chronicle of the inner workings and larger-than-life characters inside the New York Mob.

The Mob was the biggest, richest business in America . . . until it was destroyed from within by drugs, greed, and the decline of its traditional crime Family values.

As a member of New York’s feared Colombo Family, Polisi ran The Sinatra Club, an illegal after-hours gambling den that was a magic kingdom of crime and a hangout for up-and-coming mobsters like John Gotti and the three wiseguys immortalized in Martin Scorsese’s GoodFellas—Henry Hill, Jimmy Burke, and Tommy DeSimone. But the nonstop thrills of Polisi’s criminal glory days abruptly ended when he was busted for drug trafficking. Already sickened by the bloodbath that engulfed the Mob as it teetered toward extinction, he flipped and became one of a breed he had loathed all his life—a rat. In this shocking, pulse-pounding, and, at times, darkly hilarious first-person chronicle, he paints a never-before-seen picture of a larger-than-life secret underworld that, thanks to guys like him, no longer exists.

Praise For The Sinatra Club: My Life Inside the New York Mafia…

“Fascinating….In addition to an exhilarating trip though Italian-American Mafia history, Polisi's text doubles as a heartfelt memoir, wherein he candidly expounds on the pain of neglecting his family and the devastating losses that eventually impelled him to leave "The Life" behind and testify against his former colleagues.”
— Publishers Weekly (starred review)

“Mafia memoirs are well-trod ground, but Polisi’s personal focus will engage readers….like Henry Hill, the famous subject of the genre classic Wiseguy, he has a sort of disreputably-likable quality about him. For fans of inside-organized-crime books, this one’s a definite must-read.”

Sal Polisi spent much of his life inside the New York Mafia before he flipped and provided testimony against key Family members. No longer under federal witness protection, he has been featured in The New York Times, Vanity Fair, New York, and Playboy, and has been interviewed by Larry King, Connie Chung, and Matt Lauer, among others. He works as a screenwriter and playwright and also speaks frequently in schools and at law enforcement gatherings as an organized crime expert. He lives somewhere in America.
Loading...
or
Not Currently Available for Direct Purchase