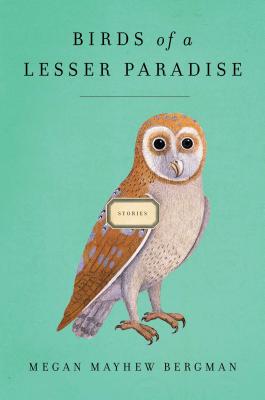 From a prizewinning young writer whose stories have been anthologized in The Best American Short Stories and New Stories from the South comes a heartwarming and hugely appealing debut collection that explores the way our choices and relationships are shaped by the menace and beauty of the natural world.

Megan Mayhew Bergman’s twelve stories capture the surprising moments when the pull of our biology becomes evident, when love or fear collide with good sense, or when our attachment to an animal or wild place can’t be denied. In “Housewifely Arts,” a single mother and her son drive hours to track down an African Gray Parrot that can mimic her deceased mother’s voice. A population control activist faces the ultimate conflict between her loyalty to the environment and her maternal desire in “Yesterday’s Whales.” And in the title story, a lonely naturalist allows an attractive stranger to lead her and her aging father on a hunt for an elusive woodpecker.

As intelligent as they are moving, the stories in Birds of a Lesser Paradise are alive with emotion, wit, and insight into the impressive power that nature has over all of us.

“Birds of a Lesser Paradise is an astonishing debut collection, by a writer reminiscent of such greats as Alice Munro, Elizabeth Strout and even Chekhov. Expertly delivered, Bergman's stories bloom from the minutiae of life. They confirm the inescapable power that nature--and our own biology--has over us.”
– Sara Gruen, author of Water for Elephants

“Megan Mayhew Bergman apparently possesses, all in one sensibility, Ralph Waldo Emerson’s love of a back-to-the-land self-sufficiency, Amy Hempel’s infinite tenderness towards animals, and Tillie Olsen’s fierce sense of the emotional intensities of motherhood. Birds of a Lesser Paradise features characters who, even understanding it as well as they do, want to mother the world, and their stories are rendered with dazzling compassion, intelligence, and grace.”
– Jim Shepard, author of You Think That’s Bad

“A big-hearted collection of stories—each one a precise and compassionate study of human life, the changes and obstacles—all carefully housed under the miracles and marvels of nature. Megan Mayhew Bergman is a brilliantly gifted writer who recognizes and highlights life's fragilities in a way that will leave your heart aching while also finding those bits of hilarity and absurdity that bring uniqueness to each and every creature.”
– Jill McCorkle, author of Going Away Shoes

“I predict that astronomers will soon be renaming the star Sirius to Megan Mayhew Bergman. Birds of a Lesser Paradise offers us a spectacular new voice in the world of American short fiction. The characters in these stories—each one—perform as beacons on who we are and how we should act, all without pretense or exhortation. This is a first-rate collection.”
—George Singleton, author of The Half-Mammals of Dixie

"Bergman's excellent stories are hard-earned and well-honed. Her characters speak as if their very lives depend upon getting it right, getting it down, facing the toughest stuff that tumbles down with equal toughness and enduring resilience. A very fine and impressive debut."
–Brad Watson, author of Aliens in the Prime of Their Lives

Megan Mayhew Bergman is the author of Almost Famous Women, Birds of a Lesser Paradise, and Nightingale Lane. She is a regular columnist for The Guardian, and her work has appeared in The New York Times, The Best American Short Stories, The Paris Review, The New Yorker, McSweeney’s, and Oxford American, among other publications. She was a fellow at the American Library in Paris and now directs Middlebury’s Bread Loaf Environmental Writers’ Conference. She lives in Vermont.