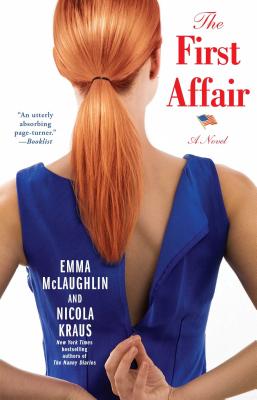 The #1 New York Times bestselling authors of The Nanny Diaries return with “a convincing portrait of a damaged young woman whose head is turned by the attentions of a dashing and powerful political figure.…An utterly absorbing page-turner” (Booklist).

I was twenty-two years old only three weeks out of college.
I thought my whole life was beginning...then he kissed me.

Jamie McAlister has resigned herself to the fact that in this job market, her painfully expensive degree might only get her a position at Starbucks, when she suddenly lands a prestigious internship at the White House. Although she doesn’t hit it off with the other interns—who come from so much money that ten weeks without a paycheck doesn’t faze them—she is eager to work hard and make the best of the opportunity while it lasts.

An unexpected encounter late one evening with the charismatic President Gregory Rutland seems like just a fleeting flirtation, but when he orchestrates clandestine meetings and late-night phone calls, their relationship quickly escalates. Jamie knows what she is doing is wrong: he’s married, he has kids, he’s the President. Yet each time she tries to extricate herself, Greg pulls her back in.

With the conflicted desires of the most powerful man in the world driving her to her breaking point, Jamie can’t help but divulge intimate details to those closest to her. But she must have confided in the wrong person, because she soon finds herself, and everyone she cares about, facing calculated public destruction at the hands of Greg’s political enemies, and—perhaps no matter how much he cares about her—at the hands of Greg himself.

Emma McLaughlin and Nicola Kraus are the New York Times bestselling authors of The Nanny Diaries, Citizen Girl, Nanny Returns, and the young adult novels, The Real Real and Over You. They are the cofounders of TheFinishedThought.com, a book coaching firm, and work together in New York City. For more information visit EmmaAndNicola.com.

Praise For The First Affair: A Novel…

“Just as they humanized a pop princess in their last outing, here they offer up a convincing portrait of a damaged young woman whose head is turned by the attentions of a dashing and powerful political figure. This compassionate examination of a young woman led astray is an utterly absorbing page-turner.”
— Booklist

“A dishy, sometimes somber, scandalous tale of what happens when you fall in love with the president of the United States.”
— Kirkus
or support indie stores by buying on
Copyright © 2020 American Booksellers Association