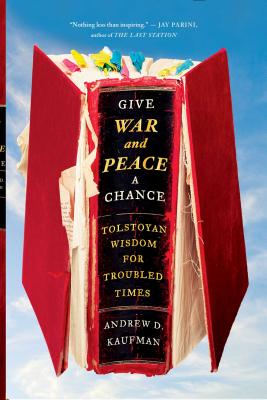 Give War and Peace a Chance

“This lively appreciation of one of the most intimidating and massive novels ever written should persuade many hesitant readers to try scaling the heights of War and Peace sooner rather than later” (Publishers Weekly).

Considered by many critics the greatest novel ever written, War and Peace is also one of the most feared. And at 1,500 pages, it’s no wonder why. Still, in July 2009 Newsweek put War and Peace at the top of its list of 100 great novels and a 2007 edition of the AARP Bulletin included the novel in their list of the top four books everybody should read by the age of fifty. A New York Times survey from 2009 identified War and Peace as the world classic you’re most likely to find people reading on their subway commute to work. What might all those Newsweek devotees, senior citizens, and harried commuters see in a book about the Napoleonic Wars in the early 1800s? War and Peace is many things. It is a love story, a family saga, a war novel. But at its core it’s a novel about human beings attempting to create a meaningful life for themselves in a country torn apart by war, social change, political intrigue, and spiritual confusion. It is a mirror of our times.

Give War and Peace a Chance takes readers on a journey through War and Peace that reframes their very understanding of what it means to live through troubled times and survive them. Touching on a broad range of topics, from courage to romance, parenting to death, Kaufman demonstrates how Tolstoy’s wisdom can help us live fuller, more meaningful lives. The ideal companion to War and Peace, this book “makes Tolstoy’s characters lively and palpable…and may well persuade readers to finally dive into one of the world’s most acclaimed—and daunting—novels” (Kirkus Reviews).

Praise For Give War and Peace a Chance: Tolstoyan Wisdom for Troubled Times…

“Give War and Peace a Chance…is an enthusiastic primer to Tolstoy’s most famous work, which shows how genuinely exciting it can be to read.”

"That a novel 'full of clear, honest reflection on the pain of living' is also 'one of the most life-affirming works of fiction' becomes, for Andrew D. Kaufman, a contradiction worth exploring. He does so in this alluring study with a ferocity and lightness of touch that Tolstoy himself would have admired. By exploring a handful of key themes in War and Peace, Kaufman brings us back to the shimmering pages of a classic novel, and his book is nothing less than inspiring."
— Jay Parini, author of The Last Station

“If you come from a family, then you'll understand [War and Peace’s] deepest meaning, thanks to Mr. Kaufman's erudition and scholarship.”

"No other novel in world literature possesses the intimidating allure of Tolstoy’s War and Peace. It is the very Everest of fiction, and most readers need a sherpa. Andrew Kaufman has not only produced a perfect guide to the setting, characters, history, and background of this epic work, all skillfully interwoven with events in Tolstoy’s life; he has done so with zest and personality."
— Dana Gioia, former Chairman of the National Endowment for the Arts and internationally acclaimed poet

“[Kaufman’s] argument is mischievously compelling: Why waste money on motivational tapes and seminars when this fictional account of the Napoleonic Wars provides greater salve for the soul?....An attaboy to Kaufman for reminding us of its relevance to our anxious century.”

"Andrew Kaufman has written the book on War and Peace for our time. In his colloquial and personal style he explores, as his subtitle puts it, Tolstoyan Wisdom For Troubled Times, recovering this wisdom not only from Tolstoy’s diaries, letters, and essays, but, more importantly yet, the text of the novel itself. This is quite simply the most engaging and thought-provoking book on Tolstoy I have ever read."
— Richard Gustafson, Columbia University, author of Leo Tolstoy: Resident and Stranger

“Once you have taken Kaufman’s well—informed yet unintimidating tour of the Russian classic, it will very likely move up to the top of your literary bucket list. Kaufman’s mission is to share the wonder and power of this ageless novel he so clearly reveres and to make the case for its continuing relevance in the 21st century. He succeeds admirably…. Even without ever having cracked the spine of the novel itself, readers will feel as if they have, coming to know its characters and their dreams, failures and destinies. [Kaufman] brings them to life with such affection that even the most flawed among them becomes someone we wish to know better."

"Andrew Kaufman has found a refreshingly informal way of reading (and re-reading) War and Peace, weaving the lives of the novel’s characters together with Tolstoy’s life and his own. By breaking all the critical rules, he manages to enter into the ever shifting and growing reality that Tolstoy sought to portray, producing an excellent ‘companion’ for new readers of the novel."
— Richard Pevear, best-selling, award-winning translator (with Larissa Volokhonsky) of War and Peace and Anna Karenina

“Kaufman looks to the novel for guidance, ‘not so much as a set of answers to life’s every challenge as an attitude toward living.’ [He] makes Tolstoy’s characters lively and palpable… [and Kaufman’s] enticing invitation may well persuade readers to finally dive into one of the world’s most acclaimed—and daunting—novels.”

“A serious, thoughtful inquiry into how literature can affect and change people's lives… Do give this fine, perceptive book a chance; it'll leave you more than ready to tackle Tolstoy's triumphant work.”

Andrew D. Kaufman, internationally recognized Russian literature scholar at the University of Virginia, is the author of Understanding Tolstoy and coauthor of Russian for Dummies. An award-winning teacher of Russian language, literature, and culture, he is a featured Tolstoy expert on Oprah.com and is frequently invited to discuss Russian literature and culture on national and international television and radio programs.
Loading...
or
Not Currently Available for Direct Purchase