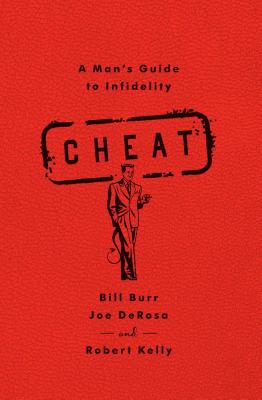 A Man's Guide to Infidelity

MONOGAMY HAS MET ITS MATCH


When it comes to scoring on the side, this book is your best friend.

Comedians Bill Burr, Joe DeRosa, and Robert Kelly have experienced the rich pleasures and unspeakable risks of romantic infidelity, and survived to tell their tales.

Now, they impart all the wisdom, advice, and humor they picked up along the way, including how to:

* Conduct your filth with the right chick, in the right place, at the right time

* Take an hour to shower and scour—and fight your worst enemy: glitter

* Explain a strange scrunchy, hair extension, or pair of earrings to your girl

* Navigate strip clubs, massage parlors, and women of the night

* Lie like a woman—and call it quits without getting caught

Featuring ten true stories from men who’ve lived the life and a link to watch Burr, DeRosa, and Kelly’s hilarious short film of the same name, Cheat is a wickedly smart field guide to philandering that will revolutionize your game.

Praise For Cheat: A Man's Guide to Infidelity…

“Wow! This fabulous book made me a better cheater and a shittier father! I can’t stop grinning!” —Artie Lange, bestselling author of Too Fat to Fish

“Uncompromising and funny. Read it. Even though it will destroy all hope.” —Colin Quinn, star of Long Story Short

“Great book. Very funny! We are all going to hell.” —Darrell Hammond, bestselling author of God, If You’re Not Up There, I’m F*cked

“I do not condone a single thing in this book; in fact I find the topic disgusting. The authors, however, are as funny as their ideas are despicable.” —Greg Gutfeld, TV host and author of The Bible of Unspeakable Truth

Bill Burr’s Monday Morning Podcast is one of the most downloaded comedy podcasts on iTunes, and he is a regular on Letterman, Conan O’Brien, and Jimmy Fallon. His third hour-long comedy special, You People Are All the Same, was released in 2012.

Joe DeRosa is writing, directing, and starring in a number of web series, working on his third comedy album, and touring the country. He has been featured in his own half-hour Comedy Central special and two Comedy Central Records audio releases. He is a regular on The Opie & Anthony Show and Fox News’ Redeye.

Robert Kelly is one of the top touring comics in the country. He hosts the popular You Know What Dude? podcast and has a recurring role on FX’s  Louie. His Just the Tip was an iTunes comedy album of the year, and his comedy specials include Comics Anonymous, Comedy Central Presents Robert Kelly, and Tourgasm.
Loading...
or support indie stores by buying on