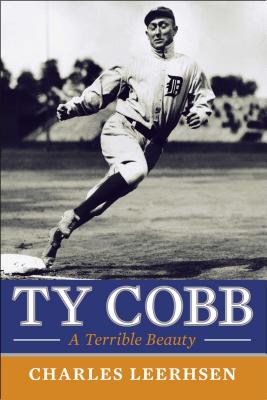 Finally—a fascinating and authoritative biography of perhaps the most controversial player in baseball history, Ty Cobb.

Ty Cobb is baseball royalty, maybe even the greatest player who ever lived. His lifetime batting average is still the highest of all time, and when he retired in 1928, after twenty-one years with the Detroit Tigers and two with the Philadelphia Athletics, he held more than ninety records. But the numbers don’t tell half of Cobb’s tale. The Georgia Peach was by far the most thrilling player of the era: “Ty Cobb could cause more excitement with a base on balls than Babe Ruth could with a grand slam,” one columnist wrote. When the Hall of Fame began in 1936, he was the first player voted in.

But Cobb was also one of the game’s most controversial characters. He got in a lot of fights, on and off the field, and was often accused of being overly aggressive. In his day, even his supporters acknowledged that he was a fierce and fiery competitor. Because his philosophy was to “create a mental hazard for the other man,” he had his enemies, but he was also widely admired. After his death in 1961, however, something strange happened: his reputation morphed into that of a monster—a virulent racist who also hated children and women, and was in turn hated by his peers.

How did this happen? Who is the real Ty Cobb? Setting the record straight, Charles Leerhsen pushed aside the myths, traveled to Georgia and Detroit, and re-traced Cobb’s journey, from the shy son of a professor and state senator who was progressive on race for his time, to America’s first true sports celebrity. In the process, he tells of a life overflowing with incident and a man who cut his own path through his times—a man we thought we knew but really didn’t.

“No matter what you think of Ty Cobb, you’ll want to read Charles Leerhsen’s fascinating biography, as he dispels rumors, exposes frauds, and challenges everything you thought you knew about the most controversial individual ever to play the great game of baseball.”
— Kevin Baker, author of Sometimes You See It Coming

"Not only the best work ever written on this American sports legend: It’s a major reconsideration of a reputation unfairly maligned for decades."
— Allen Barra

“Superbly reported, wonderfully written and often quite funny, Charles Leerhsen’s Ty Cobb: A Terrible Beauty, is a highly enlightening and highly enjoyable book. A new Cobb emerges—many-faced and passionate—in this important, original view of a figure well installed in baseball lore. This is a first-rate book by a first-rate writer."
— Kostya Kennedy, author of 56: Joe DiMaggio and the Last Magic Number in Sports

“Surprise! It wasn’t the Georgia Peach who was prejudiced (especially), it was us, against him. Leerhsen’s feat of research brings the real Cobb home at last.”
— Roy Blount Jr., author of Alphabet Juice

"A clear-eyed portrayal of Cobb not as a tyrant and not as a saint. It showcases Cobb as a flawed and vulnerable human being who, after suffering a nervous breakdown his second season, came back to fearlessly embrace his talent in an era that was just discovering what it meant to love baseball."
— Anna Clark

"Ground-breaking, thorough and compelling. . . . The most complete, well-researched and thorough treatment of Cobb that has ever been written."
— Bob D'Angelo

"Now Cobb has an advocate, one who's actually read all the old newspaper clippings (some of which flatly contradict common "knowledge"), visited the terrain, and interviewed as many relevant people as he could find. Cobb was indeed a bruised peach but, as the author shows convincingly, not a thoroughly rotten one."

"Leerhsen's magisterial reexamination presents a detailed view of Cobb culled from actual research rather than hearsay. . . . Thanks to exhaustive research, we now have a more realistic and sympathetic view of Cobb. . . . This is an important work for baseball and American historians as Cobb was one of the country's first true superstars."

"Leerhsen wraps his penetrating profile of Cobb in gripping play-by-play rundowns and a colorful portrait of the anarchic 'dead-ball' era, when players played drunk and fans chased offending umpires from the field. This is a stimulating evocation of baseball’s rambunctious youth and the man who epitomized it."

"Charles Leerhsen has done baseball aficionados a great mercy by bringing to life Ty Cobb, the man and the ballplayer—warts and all, some might say. . . . And even more, Leerhsen summons up the days when baseball was young and innocent and, one thinks, filled with a kind of raw vitality that is missing today. . . . They don’t make them like that—or like Cobb—anymore. And the real Cobb is more compelling than the one of legend and film."
— Geoffrey Norman

Charles Leerhsen is a former executive editor at Sports Illustrated. He has written for Rolling Stone, Esquire and The New York Times. His books include Crazy Good: The True Story of Dan Patch, the Most Famous Horse in America and Blood and Smoke: A True Tale of Mystery, Mayhem, and the Birth of the Indy 500. He is the winner of the SABR Baseball Research Award. He lives in Brooklyn with his wife, the writer Sarah Saffian.Visit him at CharlesLeerhsen.com.
Loading...
or
Not Currently Available for Direct Purchase