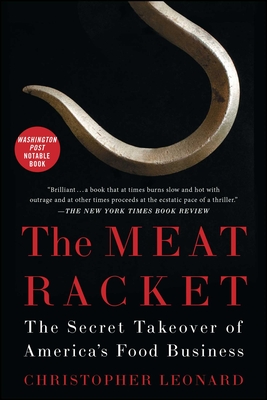 How much do you know about the meat on your dinner plate? Journalist Christopher Leonard spent more than a decade covering the country’s biggest meat companies, including four years as the national agribusiness reporter for the Associated Press. Now he delivers the first comprehensive look inside the industrial meat system, exposing how a handful of companies executed an audacious corporate takeover of the nation’s meat supply.

Leonard’s revealing account shines a light on the inner workings of Tyson Foods, a pioneer of the industrial system that dominates the market. You’ll learn how the food industry got to where it is today, and how companies like Tyson have escaped the scrutiny they deserve. You’ll discover how these companies are able to raise meat prices for consumers while pushing down the price they pay to farmers. And you’ll even see how big business and politics have derailed efforts to change the system, from a years-long legal fight in Iowa to the Obama administration’s recent failed attempt to pass reforms.

Important, timely, and explosive, The Meat Racket is an unvarnished portrait of the food industry that now dominates America’s heartland.

“An engrossing report on the industrialized American meat business…a richly detailed examination of factory farming, which has reshaped small-town life for the worse. . . . An authoritative look at a ruthlessly efficient system.”
— Kirkus Reviews

“A meticulous exposé of the meat industry… Leonard, whether he means to or not, is also telling a broader story about American business, consumerism, and—most of all—greed… What makes The Meat Racket stand out is Leonard’s superb storytelling and his clear passion for the topic…He is a man on a mission—and that is clearly the best kind of reporter to write a book like this.”
— Jessica Valenti

“I will admit when I picked up this book, it was more with the sense that it was something I should read than something that would be a page turner. And yet it immediately drew me in. Christopher Leonard's power is the ability to capture the human lives caught within the system, particularly the farmers but also the employees who helped build the corporations… this book is a compelling reminder that we all have a stake in how this business is conducted.”
— Sarah J. Gardner

Christopher Leonard is a business reporter whose work has appeared in The New York Times, The Wall Street Journal, Fortune, and Bloomberg Businessweek. He is the New York Times bestselling author of The Meat Racket and Kochland, which won the J. Anthony Lukas Work-in-Progress Award.
Loading...
or support indie stores by buying on