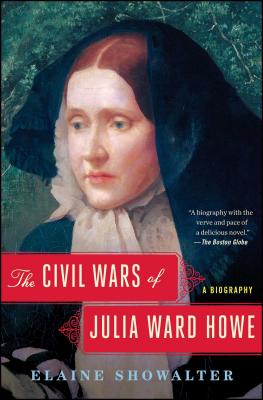 A “lively biography” (The New Yorker) of Julia Ward Howe, the powerful feminist pioneer and author of the Civil War anthem, “Battle Hymn of the Republic.”

Julia Ward (1819–1910) was an heiress who married a handsome accomplished doctor who worked with the blind and deaf. But Samuel Howe wasted her inheritance, mistreated and belittled her, and tried to stifle her intellect and freedom. Nevertheless Julia persisted and wrote poetry and a mildly shocking sexual novel that was published to good reviews. She also wrote the words to probably the most famous anthem in the country’s history—the Civil War anthem, “Battle Hymn of the Republic.”

After Samuel died when she was fifty-one, Julia lived another forty years as a dynamic, tireless, and successful activist for women’s rights, pacifism, and social reform. She became a groundbreaking figure in the abolitionist and suffrage movements, and a successful author and lecturer who fought her own battle for creative freedom and independence. In the “riveting” (The New York Times Book Review), “unfailingly vivid” (The Atlantic) and “invigorating” (O, The Oprah Magazine) The Civil Wars of Julia Ward Howe, esteemed author Elaine Showalter tells the story of Howe’s determined self-creation and brings to life the society she inhabited and the obstacles she overcame. The Civil War challenged nineteenth-century ideas of separate spheres for men and women. In Howe’s case, this transformation led to a rebellion against her marriage. She fought a second Civil War at home and discovered ways to combine domestic chores with creativity and politics, and she helped establish Mother’s Day to honor women and to recruit them to her causes. “A biography with the verve and pace of a delicious novel…Showalter reveals the entwining of Howe’s public and private lives, as she righteously battled her husband and society, and finally saw the glory she always believed she deserved” (The Boston Globe).

Elaine Showalter, Emeritus Professor of English at Princeton University, combines scholarly expertise in English and American literature with a passion for a wide range of cultural subjects. She has written ten books, most recently The Civil Wars of Julia Ward Howe: A Biography and A Jury of Her Peers: American Women Writers from Anne Bradstreet to Annie Proulx, which was awarded the Truman Capote Prize for Literary Criticism. Her writing has appeared in the Times Literary Supplement, People, and Vogue.
Loading...
or
Not Currently Available for Direct Purchase