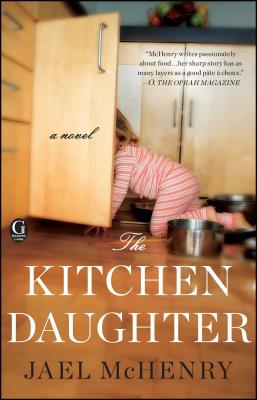 Now in paperback, a poignant and delectable novel with recipes, chronicling one woman’s journey of self-discovery that begins at the stove.

After the unexpected death of her parents, painfully shy and sheltered 26-year-old Ginny Selvaggio seeks comfort in cooking from family recipes. But the rich, peppery scent of her Nonna’s soup draws an unexpected visitor into the kitchen: the ghost of Nonna herself, dead for twenty years, who appears with a cryptic warning (“do no let her…”) before vanishing like steam from a cooling dish.

A haunted kitchen isn’t Ginny’s only challenge. Her domineering sister, Amanda, (aka “Demanda”) insists on selling their parents’ house, the only home Ginny has ever known. As she packs up her parents’ belongings, Ginny finds evidence of family secrets she isn’t sure how to unravel. She knows how to turn milk into cheese and cream into butter, but she doesn’t know why her mother hid a letter in the bedroom chimney, or the identity of the woman in her father’s photographs. The more she learns, the more she realizes the keys to these riddles lie with the dead, and there’s only one way to get answers: cook from dead people’s recipes, raise their ghosts, and ask them.

Praise For The Kitchen Daughter…

“This fresh, sharp story has as many layers as a good pâte à choux.”

"For Ginny Selvaggio, the protagonist of Jael McHenry's captivating debut novel, food is a kind of glossary and cooking provides its own magic, whether it's summoning the dead or softening the sharp edges of a world she finds neither comfortable nor familiar. THE KITCHEN DAUGHTER is sweet and bitter-sharp, a lush feast of a novel about the links between flavor and memory, family and identity."

"Magical, strong, and compelling, The Kitchen Daughter asks what is normal, how well do you know your family, and where does grief go? Jael McHenry blends seemingly unmixable ingredients into sustaining answers. I read this book in one satisfying gulp and smiled in comfort when I’d finished this distinctive, nourishing, and wise novel."


"Jael McHenry's debut is a blast of fresh air, featuring an utterly original heroine who filters her view of an unpredictable world through her love of food. A fresh premise, terrific writing, and memorable characters blended beautifully - and made me devour The Kitchen Daughter."

-- Sarah Pekkanen, author of SKIPPING A BEAT and THE OPPOSITE OF ME

"Equal parts sweet and savory, THE KITCHEN DAUGHTER by Jael McHenry is a fresh story with all the comforts of home. Ginny’s ability to conjure ghosts while dabbling in family recipes is so touching readers will want to pull up a stool. A heartwarming debut."

- Lynne Griffin, author of SEA ESCAPE and LIFE WITHOUT SUMMER

"This debut novel from Jael McHenry is everything you want in discovering a new writer. The Kitchen Daughter is subtle and effortless and emotional and lovely. The food and recipes aren't gimmicky add-ons, but integral to the momentum of the story -- and they make you want to run to the kitchen, except then you’d have to stop reading. It's a layered and satisfying tale."

- Stacey Ballis, author of GOOD ENOUGH TO EAT and THE SPINSTER SISTERS

"Gorgeously written and uniquely delicious, The Kitchen Daughter follows an endearingly awkward character after tragedy upsets the fragile order of her world. Jael McHenry is a true wordsmith who shines in evoking Ginny’s perspective of family and food, her compelling sense of self, and her eventual understanding that you don’t have to be like everyone else in order to belong. A feast of words that makes you glad to be a reader."

- Therese Walsh, author of THE LAST WILL OF MOIRA LEAHY

“A delectable family drama, The Kitchen Daughter whips up a sumptuous blend of suspense, magic and cooking. A nourishing debut.”

—Allison Winn Scotch, New York Times bestselling author of The One That I Want

“The Kitchen Daughter is tender, charming and not at all what you expect—which is what makes it a true gem. A beautifully written, boldly thought out tale.”

“A unique voice, richly drawn characters, and a dash of magic—all the right ingredients!”

Jael McHenry is a talented and enthusiastic amateur cook who writes about food and cooking. She is a monthly pop culture columnist and editor-in-chief of Intrepid Media, online a IntrepidMedia.com. Her work has appeared in publications such as the North American Review, Indiana Review, and the Graduate Review at American University, where she earned her MFA in Creative Writing. She lives in New York City.

Ginny undergoes a great transformation through the course of the novel. Compare the early version of Ginny with the woman she is by the end. Do you feel she has changed? In what ways?

“Food has power. Nonna knew that. Ma did too. I know it now. And though it can’t save me, it might help me, in some way.” (p. 45) Do you agree with Ginny that food has power? What did food and the kitchen do for Ginny? Is there something you turn to such as cooking, cleaning, or organizing as a means of coping with your emotions? Or is there a place you go to (as Ginny goes to the kitchen) that makes you feel safe?

Many times throughout the story, Amanda appears domineering and high-handed. But do you think Ginny is also quick to judge her sister? Did you relate more to one or the other? Why do you think Amanda feels she has to assume the role of the older sister?

Ginny observes, “They say you learn by doing, but you don’t have to. If you only learn from your own experience, you’re limited.” (p. 38) If Ginny had applied this advice outside of the kitchen, do you think she might have had an easier time relating to her sister? Do you agree with her observation, or do you think avoiding mistakes others have made is a different way of limiting yourself?

Discussing Elena’s death, David remarks that it might have been better if he had never met her. He says, “I wouldn’t have ever loved her, and that would’ve been my loss, but how bad is a loss you don’t know about? You can’t mourn all the people you could’ve loved but didn’t. You mourn the ones you loved and lost.” (p. 245) Do you agree with his statement? Why or why not?

Gert warns Ginny not to summon the spirit of Elena, but Ginny doesn’t listen. Would you have done the same? Why or why not? If you were in David’s shoes, would you want to see the spirit of someone you loved? If Elena had appeared the first time Ginny cooked her dish, do you feel things might have ended differently?

Do you think Ginny asked the right questions of the spirits she summoned? What would you have asked if you were in her place?

How did you feel about the way Amanda tricked Ginny into going to see Dr. Stewart? Do you think Ginny would have gone to see someone eventually, if Amanda hadn’t forced her? Is it a situation where the end justifies the means? Why do you think communication between the two sisters was so difficult?

Along with the kitchen, Ginny often turns to the Normal Book to calm herself. She tells David, “See? Normal means a lot of things to a lot of people. You’re normal. Don’t worry. It’s okay.” (p. 269) Do you agree with her? Do you think normal is a term that has a single definition, or not? Do you think we try too hard to label people as one thing or another?

The theme of appearance, in opposition to reality, is central to the book. What are some of the obvious, and not so obvious, examples of this idea? What does Ginny come to understand about the way things appear versus the way they truly are?

Ginny’s father hid a very important secret from his family. Do you feel he was right to keep both his and Ginny’s condition a secret from Ginny and Amanda? Do you think by trying to protect her, he ultimately did her a greater disservice?

The title of the novel is The Kitchen Daughter. Discuss the significance in relation to the story. What does the kitchen teach Ginny? How does trust, both in and out of the kitchen, play a part in Ginny’s shifting perspectives?