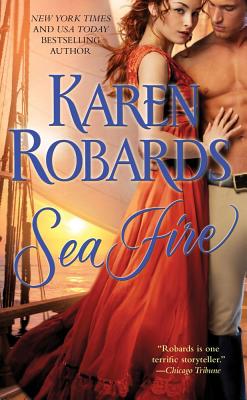 Bestselling, award-winning author Karen Robards once again brings us dazzling adventure and unforgettable characters in a searing saga of passion, seduction, and dangerous love. The tempestuous saga of Lady Catherine Aldley and the pirate Jonathan Hale that began in Island Flame now continues in Sea Fire…

What can a beautiful captive say to a handsome, ruthless pirate? Anything but “no.”
He was her husband, her lover, the pirate who seized her body, then stole her heart. Lady Catherine Aldley fled England to make a home with the infamous Jonathan Hale in Carolina. But their perfect life was shattered when Cathy was summoned to England to her ailing father, and discovered that her marriage to Jonathan was a sham. He was a wanted man, one step from the gallows. The only way she could save him was to wed her despised cousin, to let Jonathan think she had betrayed their love.
With a price on his head and vengeance in his soul, Jon Hale led a mutiny aboard the prison ship Cristobel and recaptured his faithless wife. Cathy could rile his blood as no other. The fire in her eyes infuriated and beguiled him. Cathy said she hated him, yet melted at his touch even as Jon tried to despise what he most desired. Then fate threatened to part them forever and Jon risked his life to rescue the woman he could not live without….

Karen Robards is the New York Times, USA TODAY, and Publishers Weekly bestselling author of more than fifty books and one novella. Karen published her first novel at age twenty-four and has won multiple awards throughout her career, including six Silver Pens for favorite author. Karen was described by The Daily Mail as “one of the most reliable thriller...writers in the world.” She is the mother of three boys and lives in Louisville, Kentucky.

“One of the most popular voices in women’s fiction.” —Newsweek
or
Not Currently Available for Direct Purchase
Copyright © 2020 American Booksellers Association