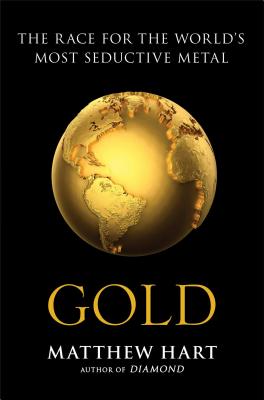 The Race for the World's Most Seductive Metal

From the lost empires of the Sahara to today’s frenzied global gold rush, a blazing exploration of the human love affair with gold by the award-winning author of Diamond.

From the lost empires of the Sahara to today’s frenzied global gold rush, a blazing exploration of the human love affair with gold by Matthew Hart, the award-winning author of Diamond

In the wake of the 2008 financial crisis, the price of gold skyrocketed—in three years more than doubling from $800 an ounce to $1900. This massive spike drove an unprecedented global gold-mining and exploration boom, much bigger than the Gold Rush of the 1800s. In Gold, acclaimed author Matthew Hart takes you on an unforgettable journey around the world and through history to tell the extraordinary story of how gold became the world’s most precious commodity.

Beginning with a page-turning dispatch from the crime-ridden inferno of the world’s deepest mine, Hart pulls back to survey gold’s tempestuous past. From the earliest civilizations, 6,000 years ago, when gold was an icon of sacred and kingly power, Hart tracks its evolution, through conquest, murder, and international mayhem, into the speculative casino-chip that the metal has become. Hart describes each boom and bust in gold’s long story, culminating in the swift and startling emergence of China as the world’s new gold titan. In writing that Publishers Weekly calls “polished and fiery,” Hart weaves together history and cutthroat economics to reveal the human dramas that have driven our lust for a precious yellow metal.

Matthew Hart is a veteran writer and journalist, and author of seven books, including the award-winning Diamond. His work has appeared in The Atlantic Monthly, Granta, the London Times, and The Financial Post Magazine. He was a contributing editor of the New York trade magazine Rapaport Diamond Report, and has appeared on 60 Minutes, CNN, and the National Geographic Channel. He lives in New York City.

Praise For Gold: The Race for the World's Most Seductive Metal…

“From deep within the gold mines of South Africa and China to corporate boardrooms, from miners and thieves to body guards and gold traders, Hart (Diamond, 2001) offers a fascinating look at the geology, geopolitics, and economics of gold.”

“With remarkable clarity, Hart reveals our historical and economic relationship with this beguiling metal... Hart’s deceptively breezy book examines a simple mineral that the human mind has transformed into something so much more complicated.”

“In his absorbing book Gold, Matthew Hart looks at the precious metal both as a mineral … and as an idea that has evolved in dizzyingly strange ways through the millenniums.”

"Gold does a splendid job of transporting readers from one defining moment in the history of gold to the next."

"Hart’s book offers a compelling, stylish, and impressively researched portrait of the history and economics of a metal that has disrupted the world order while enriching some and ruining countless others... He is a talented storyteller."