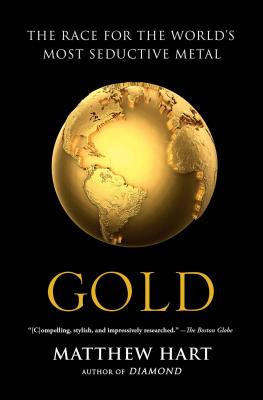 The Race for the World's Most Seductive Metal

From the award-winning author of Diamond: A blazing exploration of the human love affair with gold that "combines the engaging style of a travel narrative with sharp-eyed journalistic expos " (Publishers Weekly, starred review). In the wake of the 2008 financial crisis, the price of gold skyrocketed--in three years more than doubling from $800 an ounce to $1900. This massive spike drove an unprecedented global gold-mining and exploration boom, much bigger than the gold rush of the 1800s. In Gold, acclaimed author Matthew Hart takes you on an unforgettable journey around the world and through history to tell the extraordinary story of how gold became the world's most precious commodity. Beginning with a page-turning report from the crime-ridden inferno of the world's deepest mine, Hart traveled around the world to the sites of the hottest action in gold today, from the biggest new mine in China, to the highly secretive London gold exchange, and the lair of the world's most powerful gold trader in Geneva, Switzerland. He profiles the leaders of the gold market today, the nature of the current boom, and the likely prospects for the future. From the earliest civilizations, when gold was an icon of sacred and kingly power, Hart tracks its evolution, through conquest, murder, and international mayhem, into the speculative casino-chip that the metal has become. He ends by telling the story of the massive flows of gold that have occurred in the wake of the financial crisis and what the world's leading experts are saying about the profound changes underway in the gold market and the prospects for the future. "Compelling, stylish, and impressively researched" (The Boston Globe), Gold is a wonderful historical odyssey with important implications for today's global economy.

Matthew Hart is a veteran writer and journalist, and author of seven books, including the award-winning Diamond. His work has appeared in The Atlantic Monthly, Granta, the London Times, and The Financial Post Magazine. He was a contributing editor of the New York trade magazine Rapaport Diamond Report, and has appeared on 60 Minutes, CNN, and the National Geographic Channel. He lives in New York City
or support indie stores by buying on
Copyright © 2020 American Booksellers Association