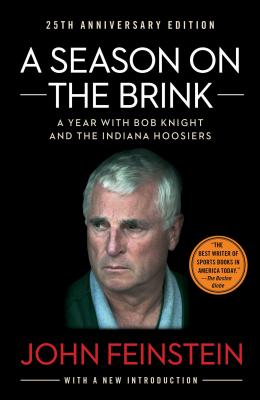 A Season on the Brink (Paperback)

A Year with Bob Knight and the Indiana Hoosiers

Twenty-five years after it spent sixteen weeks at #1 on the New York Times bestseller list, John Feinstein’s A Season on the Brink remains the classic of the genre and an unforgettable chronicle of his year spent following the Indiana Hoosiers and their fiery coach Bob Knight. This anniversary edition features an updated package and a new Introduction by Feinstein.

Twenty-five years after it spent sixteen weeks atop the New York Times bestseller list, A Season on the Brink remains the most celebrated basketball book ever written. Granted unprecedented access to legendary coach Bob Knight and the Indiana Hoosiers during the 1985–86 season, John Feinstein saw and heard it all—practices, team meetings, strategy sessions, and midgame huddles—as the team worked to return to championship form. The result is an unforgettable chronicle that not only captures the drama and pressure of big-time college basketball but also paints a vivid portrait of a complex, brilliant coach as he walks the fine line between genius and madness.

John Feinstein is the author of many bestselling books, including A Good Walk Spoiled and One on One. He writes for the Washington Post and Golf Digest and is a regular contributor to the Golf Channel.

Praise For A Season on the Brink: A Year with Bob Knight and the Indiana Hoosiers…

“Nothing less than extraordinary.” —The Chicago Tribune

“A Season on the Brink is not just my favorite sports book of all time, but one of my favorite books in general. Everything that’s important and disturbing about basketball can be understood through its details.” —Chuck Klosterman

“The best writer of sports books in America today.” —The Boston Globe

“One of the best sportswriters alive.” —USA Today
or support indie stores by buying on
Copyright © 2020 American Booksellers Association