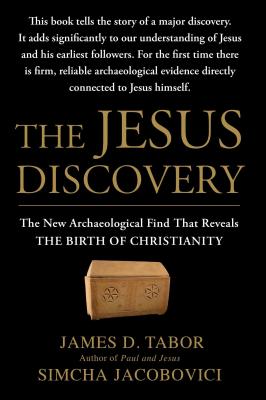 The New Archaeological Find That Reveals the Birth of Christianity

The Jesus Discovery shows how a recent major archeological discovery in Jerusalem is revolutionizing our understanding of Jesus and the earliest years of Christianity.

The Jesus Discovery is the story of a stunning new discovery that provides the first physical evidence of Christians in Jerusalem during the time of Jesus and his apostles.

In 2010, using a specialized robotic camera, authors Tabor and Jacobovici explored a previously unexcavated tomb in Jerusalem from around the time of Jesus. They made a remarkable discovery—two ossuaries, or bone boxes, one carved with the earliest known image of Jonah; the other displaying a reference to resurrection. Since the newly discovered ossuaries can be reliably dated to before 70 AD, it is possible that whoever was buried in this tomb knew Jesus and heard him preach. In addition, the newly examined tomb is in close proximity to the so-called Jesus Family Tomb, and its discovery increases the likelihood that the “Jesus Family Tomb” is, indeed, the real tomb of Jesus of Nazareth.

James D. Tabor is chair of the department of religious studies at the University of North Carolina, Charlotte. He holds a PhD in biblical studies and is an expert on Christian origins. He is the author of several books, among them The Jesus Dynasty. Visit him online at JamesTabor.com.

Simcha Jacobovici is a three-time Emmy winning filmmaker, author of The Jesus Family Tomb (with Charles Pellegrino), and host of the television series The Naked Archaeologist. He is also an adjunct professor of Religious Studies at Huntington University in Sudbury, Ontario. Visit him at APLT.ca and SimchaJtv.com.

Praise For The Jesus Discovery: The New Archaeological Find That Reveals the Birth of Christianity…

“An exciting, extraordinary, exceptional discovery. See for yourself the first archeological evidence ever for early Christian belief in resurrection.”
— Barrie Wilson, Professor of Religious Studies, York University, Toronto and author of How Jesus Became Christian