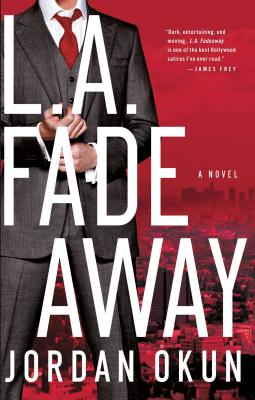 In the tradition of What Makes Sammy Run? and Less Than Zero, an edgy novel that takes readers behind the scenes at a big L.A. talent agency, revealing Hollywood’s dark side and the real price of success in show business.

The unnamed narrator in L.A. Fadeaway is twenty-three, the son of a studio head, rich, entitled, and working in the trainee program of the hottest talent agency in Los Angeles. Fueled by massive quantities of unchecked ambition and attitude, he has one goal: become an agent and take over Hollywood.

Yet in spite of his cocky-cool demeanor, living the “life” is not all it’s cracked up to be. This born-andbred boy of la-la land is consumed with constant anxiety, which he dulls with the usual tools of the trade: Xanax, alcohol, pot, and porn. He knows all too well that Hollywood is a zerosum game: the only way to get power is to take it. The question is how low is he willing to go in order to ascend the Hollywood canyons—and will his determination to follow in his father’s footsteps change after the discovery of an awful family secret?

Ready to take his rightful place in the canon with Sammy Glick, L.A. Fadeaway’s enigmatic hero takes readers deep into this dark, star-filled subculture with a hilarious, brutally honest, and unfiltered eye. In L.A. Fadeaway, never has Hollywood been so frightening— or fun.

Jordan Okun got his start in the ICM mailroom and rose through the assistant ranks. He went on to become a creative executive at a production company before leaving to pursue writing full-time. Okun lives in Los Angeles, California. This is his first novel. Visit JordanOkun.com

Praise For L.A. Fadeaway: A Novel…

“Dark, entertaining, and moving, L.A. Fadeaway is one of the best Hollywood satires I’ve ever read. Jordan Okun is an amazing young writer; I look forward to reading everything he does.” —James Frey

“L.A. Fadeaway is a scathing peek behind Hollywood's tinted windows. Wild and honest, yet oddly affectionate. I learned a lot—maybe too much.” —Chuck Hogan, author of The Town

“Terrifyingly accurate and frighteningly addictive, L.A. Fadeaway is a manual for anyone who wants to make it in Hollywood. A fast, fun, razor-sharp ride: think Less Than Zero meets Entourage. I loved it.”
— Eli Roth, writer and director of Hostel and co-star of Inglourious Basterds