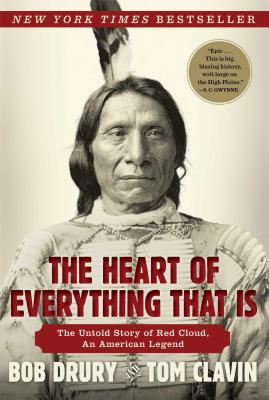 The Heart of Everything That Is

The Untold Story of Red Cloud, An American Legend

“The authors present the epic story of Red Cloud, the only Native American tribal leader to defeat the U.S. Army in the West. Red Cloud could be vicious and savage and he used those attributes to achieve power. But he could also show patience and restraint in his efforts to defeat the Army's expansion into the Powder River country of present-day Wyoming. This book presents an important chapter in American history that needed to be told, using Red Cloud's own autobiography as a major source.”
— George Rishel, The Sly Fox, Virden, IL
View the List


An astonishing untold story of the American West

The great Sioux warrior-statesman Red Cloud was the only American Indian in history to defeat the United States Army in a war, forcing the government to sue for peace on his terms. At the peak of Red Cloud’s powers the Sioux could claim control of one-fifth of the contiguous United States and the loyalty of thousands of fierce fighters. But the fog of history has left Red Cloud strangely obscured. Now, thanks to the rediscovery of a lost autobiography, and painstaking research by two award-winning authors, the story of our nation’s most powerful and successful Indian warrior can finally be told.

Born in 1821 near the Platte River in modern-day Nebraska, Red Cloud lived an epic life of courage, wisdom, and fortitude in the face of a relentless enemy—the soldiers and settlers who represented the “manifest destiny” of an expanding America. He grew up an orphan and had to overcome numerous social disadvantages to advance in Sioux culture. Red Cloud did that by being the best fighter, strategist, and leader of his fellow warriors. As the white man pushed farther and farther west, they stole the Indians’ land, slaughtered the venerated buffalo, and murdered with impunity anyone who resisted their intrusions. The final straw for Red Cloud and his warriors was the U.S. government’s frenzied spate of fort building throughout the pristine Powder River Country that abutted the Sioux’s sacred Black Hills—Paha Sapa to the Sioux, or “The Heart of Everything That Is.”

The result was a gathering of angry tribes under one powerful leader. “The white man lies and steals,” Red Cloud told his thousands of braves at council fire. “My lodges were many, now they are few. The white man wants all. They must fight for it.” What came to be known as Red Cloud’s War (1866–1868) culminated in a massacre of American cavalry troops that presaged the Little Bighorn and served warning to Washington that the Plains Indians would fight, and die, for their land and traditions. But many more American soldiers would die first.

In The Heart of Everything That Is, Bob Drury and Tom Clavin, the New York Times bestselling authors of Halsey’s Typhoon and The Last Stand of Fox Company, restore Red Cloud to his rightful place in American history in a sweeping and dramatic narrative based on years of primary research. As they trace the events leading to Red Cloud’s War they provide intimate portraits of the many and various men and women whose lives Red Cloud touched—mountain men such as the larger-than-life Jim Bridger; U.S. generals like William Tecumseh Sherman who were charged with annihilating the Sioux; fearless explorers such as the dashing John Bozeman; and the warriors whom Red Cloud groomed, the legendary Crazy Horse in particular. And residing at the heart of the story is Red Cloud, fighting for the very existence of the Indian way of life.

This fiery narrative, fueled by contemporary diaries and journals, newspaper reports, eyewitness accounts, and meticulous firsthand sourcing, is a stirring chronicle of the conflict between an expanding white civilization and the Plains Indians who stood in its way. The Heart of Everything That Is not only places the reader at the center of this remarkable epoch, but finally gives Red Cloud the modern-day recognition he deserves.

Praise For The Heart of Everything That Is: The Untold Story of Red Cloud, An American Legend…

A SALON.COM BEST BOOK OF THE YEAR

“A ripping yarn . . . A quintessentially Western tale of bold exploits, tough characters, brutal conditions and a lost way of life, this sounds like the sort of story that practically tells itself. Yet you only realize how little justice most popular histories do to their source material when you come across a book, like this one, that does everything right. It’s customary to say of certain nonfiction books — gussied up with plenty of 'color' and psychological speculation — that they 'read like a novel,' but truth be told, most of the time we’d have to be talking about a pretty mediocre novel. The Heart of Everything That Is, on the other hand, resembles the good ones. There were times, turning its pages, when I could almost smell the pines of the Black Hills, feel the icy wind tearing down from Canada across the prairie and hear the hooves of the buffalo pounding the earth.”
— Laura Miller

“Exquisitely told . . . Remarkably detailed . . . The story of Red Cloud's unusual guile and strategic genius makes the better-known Sitting Bull and Crazy Horse pale in comparison. . . . This is no knee-jerk history about how the West was won, or how the West was lost. This historical chronicle is unabashed, unbiased and disturbingly honest, leaving no razor-sharp arrowhead unturned, no rifle trigger unpulled. . . . A compelling and fiery narrative.”

“Vivid . . . Lively . . . A tale of lies, trickery, and brutal slaughter . . . In telling the story of Red Cloud, Messrs. Drury and Clavin appropriately bring a number of the larger-than-life figures from that time onstage . . . [and] chronicle in considerable detail the shameful treatment of the Indians across the plains and the destruction of their ancient way of life.”

“A page turner . . . Drawing on archives, letters, and a long-lost autobiography written toward the end of Red Cloud’s life, the narrative has a remarkable immediacy . . . [and] the narrative sweep of a great Western.”

“Valuable . . . Meticulous . . . [A] remarkable story . . . The writers don’t shy away from the atrocities on both sides of the gruesome, long-running conflict between the Indians and the U.S. forces. But when, for the umpteenth time, U.S. officials break a contract as soon as the glint of gold is spotted in the hills, one cannot help but feel that there’s all the more reason to celebrate one of the Sioux’s most impressive fighters.”

“The authors paint a full and vivid picture of the Oglala Sioux leader . . . The story of Red Cloud is presented here with all the tension and excitement of a good Western novel. . . . The narrative is gripping but not sentimental, and it is well-sourced, drawing, for example, on Red Cloud’s autobiography, lost for nearly a century, and the papers of many others who knew Red Cloud’s War.”

“Astounding . . . A tour de force of historical storytelling . . . The Heart of Everything That Is is grand in scope and beautifully observed. . . . Together, [Drury and Clavin] have managed a feat of scholarship that interweaves ethnological brilliance and an insightful reinterpretation of Indian culture from the point of view of the Sioux.”

“Riveting . . . Meticulously researched . . . One of the biggest stories in American history . . . The authors uncovered a wealth of material from diaries and letters written by U.S. military officers and their wives and children, and wilderness trackers, plus a treasure trove of historical information gleaned from the letters and journals of the pioneers who crossed the Great Plains during the 1800s.”

“A gripping narrative . . . This fascinating book is highly recommended to anyone interested in the history of the Old West.”

"Comprehensive . . . For all of our culture’s fascination with the American Indian, it’s almost impossible to believe that one of the most well-known Indians of his time, the Oglala Sioux warrior chief Red Cloud, could be largely forgotten until now. Yet that’s exactly what we discover in this illuminating account."

“Histories of the Sioux Wars have too often cast all other warriors into the shadow of Crazy Horse. Drury and Clavin shine welcome light on Red Cloud, a brilliant leader and military strategist whose life was an important part of this brutal and decisive movement in America’s history. This is an absorbing and evocative examination of the endgame in the three-hundred-year war between Native Americans and settlers of European descent.”
— Charles Frazier, author of Cold Mountain

“The word ‘epic’ is overused these days. Not here. This is big, blazing history, writ large on the High Plains. Clavin and Drury handle it beautifully. Through the striking historical figure of Red Cloud, they tell story of the Sioux Nation and of the fight for the American West.”
— S. C. Gwynne, author of Empire of the Summer Moon

“Red Cloud is one of the great figures in nineteenth-century America’s tortured relationships with the many peoples who occupied our country before we took it. Finally, there is a portrait worthy of the man, fully drawn and realized, all the complicated undertow acknowledged and embraced.”
— Ken Burns, filmmaker and coauthor of The Civil War

“Finally we have the full story of Red Cloud, told without the sentimentality and delusional romance that too many white historians bring to the American native tribes. The Powder River country of the West entrapped two equally objectionable groups—the soldiers that Washington sent to decimate the tribes, and the tribes themselves, who had been slaughtering each other for centuries. That stirring but bloodthirsty era deserves an honest treatment like this.”
— Rinker Buck

Tom Clavin is the author or coauthor of sixteen books. For fifteen years he wrote for The New York Times and has contributed to such magazines as Golf, Men's Journal, Parade, Reader’s Digest, and Smithsonian. He is currently the investigative features correspondent for Manhattan Magazine. He lives in Sag Harbor, New York.