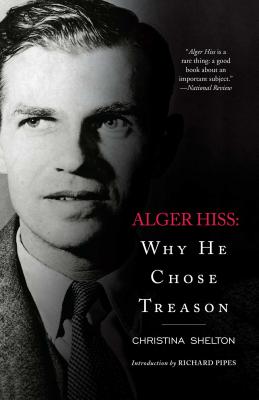 Why He Chose Treason

A former U.S. Intelligence analyst shines a fresh light on accused Soviet spy Alger Hiss, providing “a solid look at the specifics of the case as well as a useful overview of the ideological debate gripping America” (Kirkus Reviews).

In 1948, former U.S. State Department official Alger Hiss was accused of being a Soviet spy. Because the statute of limitations on espionage had run out, he was convicted only of perjury. Decades later—after the Hiss trial had been long forgotten by most—archival evidence surfaced confirming the accusations: a public servant with access to classified documents had indeed passed crucial information to the Soviets for more than a decade.

Yet many on the American left still consider Hiss an iconic figure—an innocent victim accused of unsubstantiated crimes. They prefer to focus on the collectivist ideals Hiss stood for, rather than confront the reality of a man who systemically and methodically betrayed his country.

Former U.S. Intelligence analyst Christina Shelton employs an in-depth knowledge of Soviet intelligence affairs as well as recently released Hungarian and KGB archival material to shine a fresh light on one of the most famous U.S. espionage cases. The story is dramatic, but Shelton’s analysis goes beyond sensationalism as she explores both the ideological motivation behind Hiss’s behavior and the lasting influence it has had on U.S. foreign policy.

Christina Shelton is a retired U.S. intelligence analyst. She spent twenty-two years working as a Soviet analyst and a Counterintelligence Branch Chief at the Defense Intelligence Agency. She has also been a staff analyst at various think tanks.

Praise For Alger Hiss: Why He Chose Treason…

"A vigorous reappraisal of the Hiss-Chambers espionage affair, leaving no doubt of Hiss’s guilt.
The author makes a good case for the willful blindness practiced by pro-Hiss parties involved ...

A solid look at the specifics of the case as well as a useful overview of the ideological debate gripping America." --Kirkus

"Rigorous and carefully documented analysis...[Alger Hiss] is a rare thing: a good book about an important subject. Shelton makes a sledgehammer of a case…a sustained artillery assault." --National Review

“ A much needed book... With clarity, conciseness, and a sure hand, Christina Shelton guides the reader through what has become an otherwise nearly impenetrable jungle of controversy.”” -- Tennent H. Bagley, author of Spy Wars


“In Alger Hiss:  Why He Chose Treason, Christina Shelton ably captures the real Alger Hiss—his path to communism, his treason, and his conviction and imprisonment.  Her evidence is overpowering:  Alger Hiss was indeed a communist spy.  Shelton carefully connects Hiss to his historical context inside America’s political elite, which was chagrined and strangely baffled when Hiss’s treason was exposed.” --Burton Folsom, Jr. and Anita Folsom, authors of FDR Goes to War

“Shelton makes clear what Hiss did and the impact it had on U.S. intelligence. . . . A well-done book written by someone who knows.”