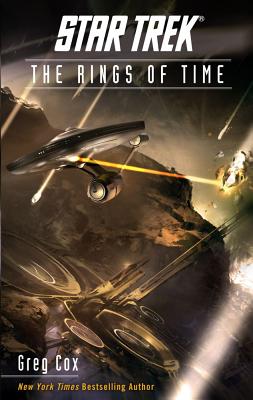 The Rings of Time (Star Trek

The U.S.S. Enterprise responds to a distress call from a vital dilithium-mining colony in the Klondike system. The colony is located on Skagway, a moon orbiting Klondike-6, a gas giant not unlike Saturn. For unknown reasons, the planet’s rings are coming apart, threatening the colony and its inhabitants. Kirk and his crew need to find a solution—fast.There are more than 3,000 colonists, including hundreds of families, on Skagway, which is more than even the Enterprise can take on, and there are no other rescue ships or habitable planets anywhere in the vicinity.

Meanwhile, an approaching comet that may be the source of the crisis turns out to be a mysterious alien probe. Sensors indicate that the probe is incredibly old and running low on power. Suspecting that the probe may have something to do with the threat to Skagway, Kirk has the probe beamed aboard the Enterprise. Suddenly after a blinding flash, Kirk suddenly finds himself floating in orbit above Saturn in our solar system, drifting in space wearing a twenty-first century NASA spacesuit. What just happened...?