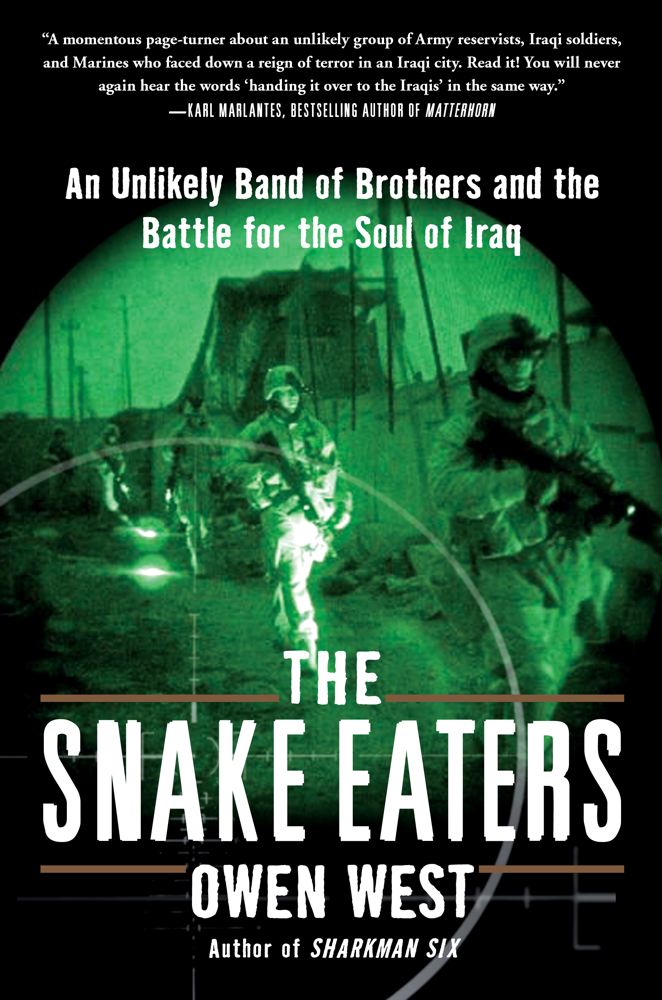 In this riveting narrative, U.S. Marine and acclaimed novelist Owen West puts readers into the boots of an isolated band of American advisors and Iraqis fighting together in tumultuous Anbar Province, where the people they are trying to protect and the insurgents who are trying to kill them are indistinguishable.

WHEN A DOZEN UNPREPARED AMERICAN ARMY RESERVISTS ARE DROPPED OFF on an isolated Iraqi outpost with orders to be its military advisors, they have no idea that what they will really be doing is fighting. With no training to fall back on, this group—including a guitarist, a DEA agent, a plumber, and a postal worker—must somehow mentor the “Snake Eaters,” an Iraqi battalion locked in a deadly struggle over an insurgent-infested town along the Euphrates River. They are plunged into complex counterinsurgent warfare side by side with their Iraqi charges, soon discovering that at such close quarters moral standards are inevitably blurred. The battle becomes so personal that the combatants know each other’s names, faces, and especially the families caught in the middle.

Owen West, a third-generation U.S. Marine, tells the gripping, boots-on-the-ground story of the remarkable American and Iraqi troops who for two years fought the insurgency street by street and house by house in the poisonous city of Khalidiya, Iraq. The American advisors were a ramshackle group of Army reservists, Marines, and National Guardsmen with little support or understanding from the higher ranks. The Iraqi battalion they were assigned was from the very first both amateurish and hostile. In a town where the people they were trying to protect were indistinguishable from the enemy they were trying to kill—and few locals ever told the truth—it seemed like a mission doomed to failure.

But with courage, infinite patience, and a sense of duty few outsiders understood, the young American and Iraqi soldiers on patrol learned to work with each other and with the townspeople, winning their trust and revealing war as a series of human acts. From Major Mohammed, the Snake Eater who garners the most respect from the Americans precisely because he likes them the least, to the bighearted Staff Sergeant Blakley, a medic stalked by a sniper, the heroic soldiers in these pages are as complex as their war.

By the end of the mission, the Snake Eaters was the first Iraqi battalion granted independent battle space, the insurgency was wiped off the streets of Khalidiya, and peace was restored. A rare success story to emerge from the war, West’s exceptional book is as instructive as it is impossible to put down.

Owen West is donating his net proceeds from The Snake Eaters to the Marine Corps Scholarship Foundation and to the families of fallen advisors and fallen Iraqi “Snake Eaters.”

Praise For The Snake Eaters: An Unlikely Band of Brothers and the Battle for the Soul of Iraq…

"Every deploying adviser, and every American interested in how we are fighting our wars, should read Owen West's gripping and important book." —Max Boot, Wall Street Journal

“A momentous page-turner about an unlikely group of Army reservists, Iraqi soldiers, and Marines who faced down a reign of terror in an Iraqi city. It will make you swell with pride at plain old American ingenuity and courage. Read it! You will never again hear the words ‘handing it over to the Iraqis’ in the same way.” —Karl Marlantes, bestselling author of Matterhorn

“The single most important book to come out of the wars in Iraq and Afghanistan. West captures the courage and competence, the brilliance and bumbling, the hopes and horrors, of a generation of warriors: combat advisors. They are our Lawrence of Arabia, our unsung heroes who turned the tide in Iraq and show us the way to success and survival in the generations to come. This should be required reading, inspiring and informing our military, our politicians, and the citizens of our nation as we face the challenges of the 21st Century.” —Lt. Col. Dave Grossman, author of On Killing and On Combat

“Stunning in its portrayal, this highly personal book conveys a tremendous sense of time and place, set in a wickedly complex war zone that our young men faced in a foreign land, coaching a foreign force, in a type of combat foreign to those who have forgotten that war is ultimately a human endeavor. Vivid and honest, it holds true the real lessons of counter-insurgent war and is essential reading for those who seek to understand what we demand from those we send to fight for us.” —Four-star General James Mattis, Commander of the U.S. Central Command

“Of all the Iraq books, this stands alone. It’s an action-packed narrative that should be read by everyone, whether it’s military advisors, the generals or politicians who send them to faraway lands and anyone interested in military stories. As a fellow advisor, I stand alongside West and the rest of our tribe and shout that advising is fighting, first and foremost, not training. His account will be timeless.”—Dakota Meyer, former Marine advisor and 2011 Medal of Honor recipient.

"Owen West has written a brilliant and insightful account of battle in Iraq. The unique and complex experiences he witnessed are recounted in an exciting and moving style that makes The Snake Eaters an exceptional read. This book is chock full of superb lessons learned that make it required reading for all those who truly want to understand the complicated nature of today's conflicts."—General Anthony C. Zinni USMC (Retired)

“Owen West’s The Snake Eaters is a searing combat tale from the darkest days of the Iraq War, but it’s also much more. Combat advisors training indigenous security forces to fight their own wars must have a key role in American defense policy in the 21st century. This book shows how it’s done.” —Nathaniel Fick, author of One Bullet Away and CEO of the Center for a New American Security

“Gripping, disturbing . . . an unholy combination of Black Hawk Down and Catch-22. . . One of the better reflections on the war in Iraq, with enough sense of on-the-ground combat reality to hold disturbing portents for future ‘small wars.’” —Kirkus

"Outstanding study of the advisers’ role in Iraq." —Booklist

"An eminently useful and readable account of an advisory team in Iraq that should make\ us question the conventional wisdom about counterinsurgency, advising, and what works and what does not."

"West smoothly carries readers into Khalidiya, placing us into the streets, schools, and homes of supporting civilians the 12 were trying to protect."

Owen West is a former Marine major who served two combat tours in Iraq. He is the author of two novels, including Sharkman Six, which won the Boyd literary award for best military novel, and his work has appeared in Men’s Journal, Playboy, The New York Times, The Wall Street Journal, and numerous other publications.