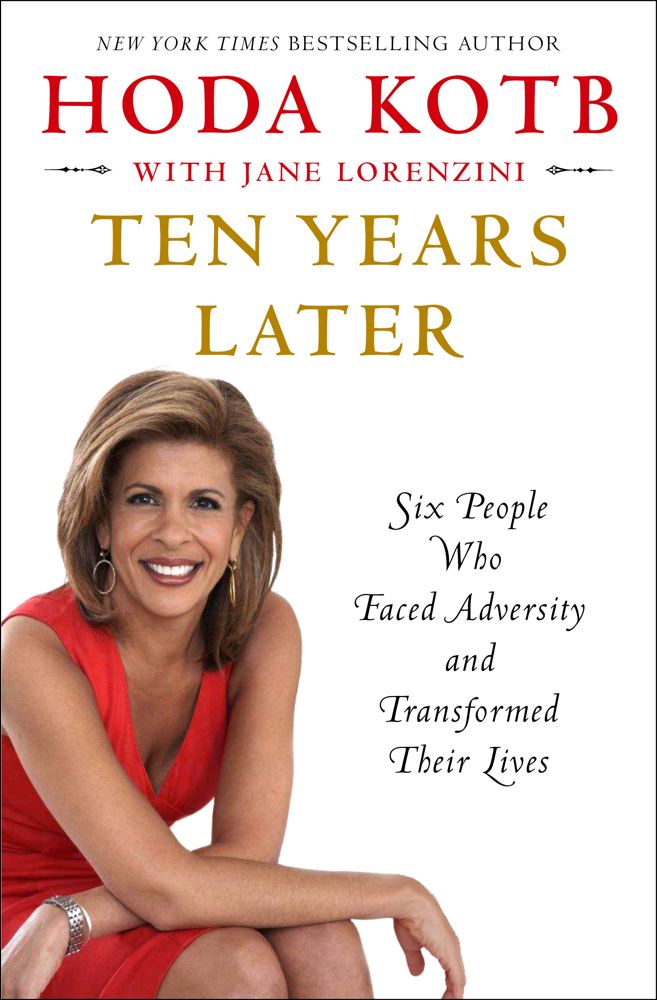 Six People Who Faced Adversity and Transformed Their Lives

New York Times bestselling author and beloved Today show co-anchor tells the incredible stories of people who, when faced with impossibly challenging or tragic life situations, persevere—and even thrive—and asks, What if you, facing a game-changing event or decision right now, could see ten years into the future?

Through years of perseverance, purpose, and passion, Hoda Kotb landed a spot with Kathie Lee on the Today show, won numerous journalism awards, and gained valuable life lessons. Now, after captivating readers in her blockbuster memoir Hoda, she turns to stories about others who have undergone personal transformation against great odds.

In Ten Years Later, Hoda chronicles six amazing stories by identifying a game-changing event in her subjects’ lives and then revisiting those lives a decade later. We meet Amy Barnes, who took the leap to escape an abusive relationship, lost an astounding 340 pounds, and now encourages women like her to cultivate their mental and physical strength. There’s also Ron Clifford, a civilian hero of 9/11, who saved the life of a burn victim in the wreckage of the towers—only to learn the same day that his beloved sister and niece were passengers on Flight 175. Patrick Weiland, a former network producer who won a Peabody at age twenty-two and later spiraled into drug addition, demonstrates the power of a second chance.

Ten Years Later is a firsthand testament to the enduring power of the human spirit. Through inspirational life stories, Hoda shows how adversity can unleash our best qualities: resilience, perseverance, gratitude, empathy, and creativity. This book will inspire you to believe in the future, no matter how dark the present, and tap into the ability to reach your highest potential.

Hoda Kotb was named co-anchor of the fourth hour of Today in 2007. She has also been a Dateline NBC correspondent since 1998 and is a New York Times bestselling author for her book, Hoda. The three-time Emmy winner also won the prestigious 2006 Peabody Award, the 2003 Gracie Award, and the 2002 Edward R. Murrow Award. Her most recent book is Where We Belong, and she resides in New York City.