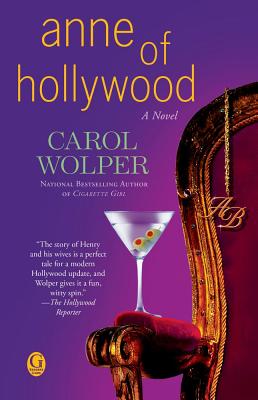 Skirts may be shorter now, and messages sent by iPhone, but passion, intrigue, and a lust for power don’t change. National bestselling author Carol Wolper spins a mesmerizing tale of a twenty-first-century Anne Boleyn.??

Skirts are shorter now, and messages sent by iPhone, but passion, intrigue, and a lust for power don’t change. National bestselling author Carol Wolper spins a mesmerizing tale of a twenty-first-century Anne Boleyn.

Wily, intelligent, and seductive, with a dark beauty that stands out among the curvy California beach blondes, Anne attracts the attention of Henry Tudor, the handsome corporate mogul who reigns in Hollywood. Every starlet, socialite, and shark wants a piece of Henry, but he only wants Anne. The question is: can she keep him?

Welcome to a privileged world where hidden motives abound, everyone has something to sell, and safe havens don’t exist. Henry Tudor has more options than most men, and less guilt than is good for anyone. The two may be in love, but even Anne’s wiles and skill won’t guarantee his enduring passion. With Henry’s closest confidante scheming against her, and another beautiful contender waiting in the wings, Anne is fighting not just for the lifestyle to which she has grown accustomed . . . but for love. Can she muster the charm and wit to pull off her very own Hollywood ending?

Praise For Anne of Hollywood…

"The story of Henry and his wives is a perfect tale for a modern Hollywood update and Wolper gives it a fun witty spin. This is a perfect beach read for anyone headed somewhere warm for a mid-winter break or, for those not traveling, the perfect book to lose oneself in on a dreary day."

"An entertaining read to be taken with a dose of humour. Leave academia behind and enjoy the ride."

Carol Wolper got her start in Hollywood working for producers Don Simpson and Jerry Bruckheimer. In 1999, her debut novel The Cigarette Girl became a national bestseller that was translated into seven languages. Carol has written pilot scripts for ABC, CBS, FX, HBO, and Warner Brother Studio. She has written for Vogue, Los Angeles Magazine (where she had her own column), “C” magazine, L.A. Confidential, Art Basel Magazine, and the Los Angeles Times Sunday magazine.
Loading...
or
Not Currently Available for Direct Purchase