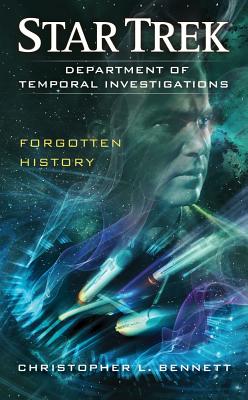 In a universe where history as we know it could be wiped out at any moment, only the most disciplined, obsessive, and unimaginative government employees have what it takes to face the existential uncertainty of it all: Federation investigators Lucsly and Dulmur.

The agents of the Department of Temporal Investigations are assigned to look into an anomaly that has appeared deep in Federation territory. It’s difficult to get clear readings, but a mysterious inactive vessel lies at the heart of the anomaly, one outfitted with some sort of temporal drive disrupting space-time and subspace. To the agents’ shock, the ship bears a striking resemblance to a Constitution-class starship, and its warp signature matches that of the original Federation starship Enterprise NCC-1701—the ship of James T. Kirk, that infamous bogeyman of temporal investigators, whose record of violations is held up by DTI agents as a cautionary tale for Starfleet recklessness toward history. But the vessel’s hull markings identify it as Timeship Two, belonging to none other than the DTI itself. At first, Agents Lucsly and Dulmur assume the ship is from some other timeline . . . but its quantum signature confirms that it came from their own past, despite the fact that the DTI never possessed such a timeship. While the anomaly is closely monitored, Lucsly and Dulmur must search for answers in the history of Kirk’s Enterprise and its many encounters with time travel—a series of events with direct ties to the origins of the DTI itself. . . .