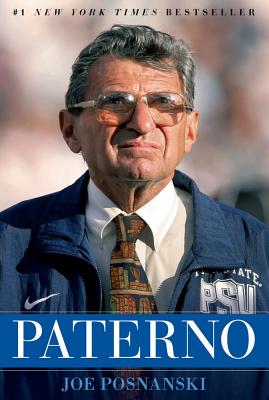 By America’s premier sportswriter, written with full cooperation of Joe Paterno and his family, Paterno is the definitive account of the epic life of America’s winningest college football coach. Published to coincide with Penn State football’s first season without their legendary leader.

Joe Posnanski’s biography of the late Penn State football coach Joe Paterno follows in the tradition of works by Richard Ben Cramer on Joe DiMaggio and David Maraniss on Vince Lombardi. Having gained unprecedented access to Paterno, as well as the coach’s personal notes and files, Posnanski spent the last two years of Paterno’s life covering the coach, on (and off) the field and through the scandal that ended Paterno’s legendary career.

Joe Posnanski, who in 2012 was named the Best Sportswriter in America by the National Sportswriters and Sportscasters Hall of Fame, was with Paterno and his family as a horrific national scandal unfolded and Paterno was fired. Within three months, Paterno died of lung cancer, a tragic end to a life that was epic, influential, and operatic.

Paterno is the fullest description we will ever have of the man’s character and career. In this honest and surprising portrait, Joe Posnanski brings new insight and understanding to one of the most controversial figures in America.

"Paterno is a portrait very much in three dimensions. It is the story of an extraordinary life."

The truth is that [Paterno] is a portrait very much in three dimensions. In that sense, Posnanski succeeds…We are left with this book as the final record of the final days. It is more than that, obviously - it is the story of an extraordinary life - but it is most compelling as a chronicle of the end.”

Joe Posnanski is the author of the #1 New York Times bestseller Paterno. He is a national columnist for NBC Sports and was a senior writer at Sports Illustrated from 2009 to 2012. In 2012, he was named National Sportswriter of the Year by the Sportswriters and Sportscasters Hall of Fame. Before joining SI, he was a columnist for the Kansas City Star for fifteen years, and was twice named the best sports columnist in America by the Associated Press Sports Editors. He is the author of four books and has been anthologized widely. He lives in Charlotte, North Carolina, with his family.
or
Not Currently Available for Direct Purchase