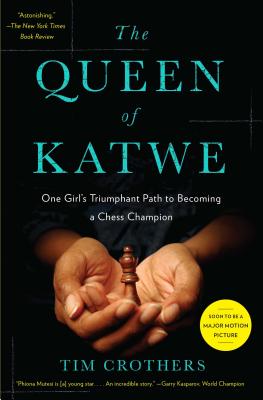 "A must-read for all who dare to dream."
— Library Journal (starred review)

"Moving.... A poignant reminder of the power of hope."
— Kirkus Reviews

“It’s a story almost too uplifting to believe… Crothers tells Phiona Mutesi’s story in a crisp, reportorial style, but it’s nearly impossible to read the book without a strong emotional response… Inspiring.”
— Booklist

"The Queen of Katwe Tim Crothers gives us an inspiring and heart-wrenching story."
— Chessville.com

"An inspirational profile of an amazing chess player from one of the world's worst slums."
— Shelf Awareness

"Part of Crothers's achievement is his presentation of the terrible circumstances millions of people battle every day to sustain themselves and feed their families, nearly all of them lacking the bright, improbable possibility provided by Mutesi."
— The Boston Globe

"Wonderful.... A story of resilience and creativity in the midst of immense need."
— ForeignPolicy.com

“So compelling… Crothers writes the story matter-of-factly ... reserving judgment and bias…. It beckons the reader to wonder at the possibilities that lay before Mutesi, and it reminds us of the harsh reality in which she continues to live.”
— Charleston Post Courier

Tim Crothers is a former senior writer at Sports Illustrated. He is the author of The Queen of Katwe: One Girl’s Triumphant Path to Becoming a Chess Champion and The Man Watching, the biography of University of North Carolina women’s soccer coach Anson Dorrance, and coauthor of Hard Work, the autobiography of UNC basketball coach Roy Williams. He lives in Chapel Hill, North Carolina, with his wife and two children.
Loading...
or
Not Currently Available for Direct Purchase