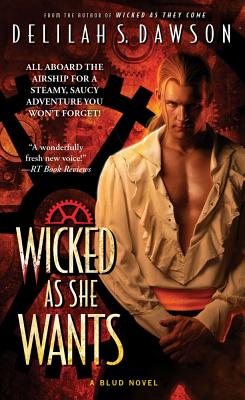 Wicked as She Wants (A Blud Novel #4)

The second book in the darkly tempting Blud series, featuring a vampire princess who embarks upon a dangerous journey to claim what is rightfully hers.

True love’s kiss isn’t enough for this Blud princess. But blood and music may win her heart forever. . . .

After four years crammed in a suitcase, drained and unconscious, Ahnastasia Feodor, Crown Princess of Freesia, is not sure which calls to her more: the sound of music or the scent of blood. The source of both is the handsome and mysterious Casper Sterling, once the most celebrated and self-centered musician in Sangland. Fortunately, bleeding one’s subjects dry is expected of Blud royalty. Much to Ahna’s frustration, however, the debauched and reckless enigma—he is definitely not a Bludman, though not exactly human either—is her only ticket back to her snow-rimmed and magical homeland. Ahna needs Casper’s help to defeat an evil sorceress and claim her throne—if she doesn’t drain him first. But as they team up for a harrowing journey filled with pirates and painted ladies, daimons and dashing Bludmen, her craving for blood becomes an unrelenting hunger of the heart. . . .